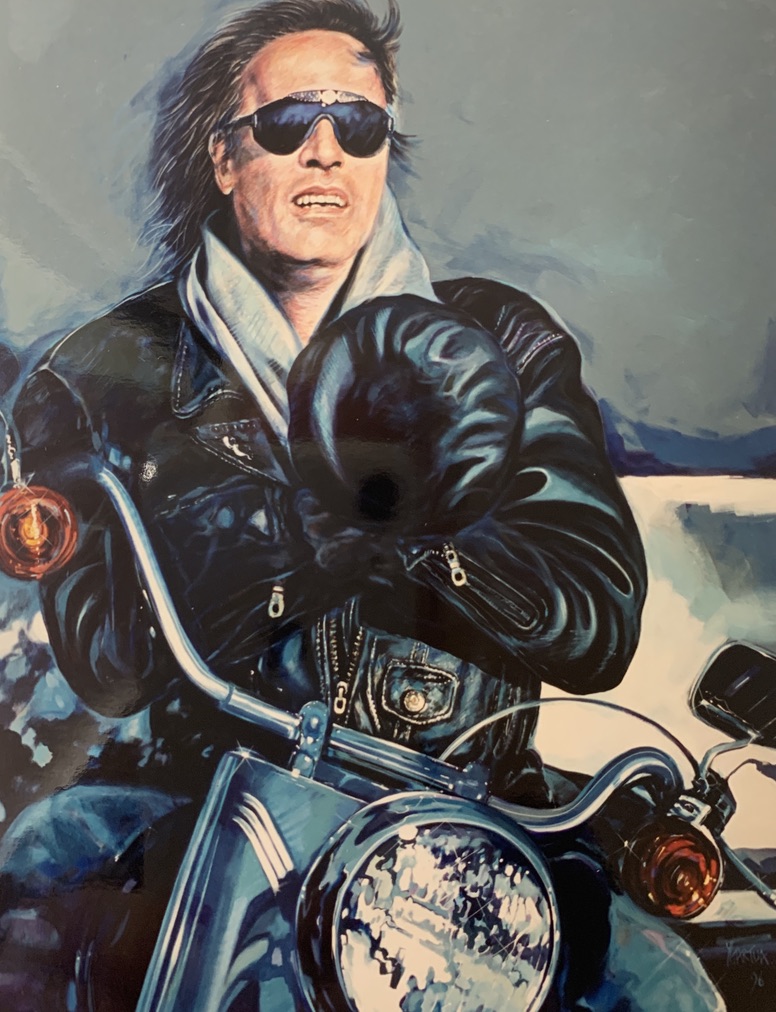 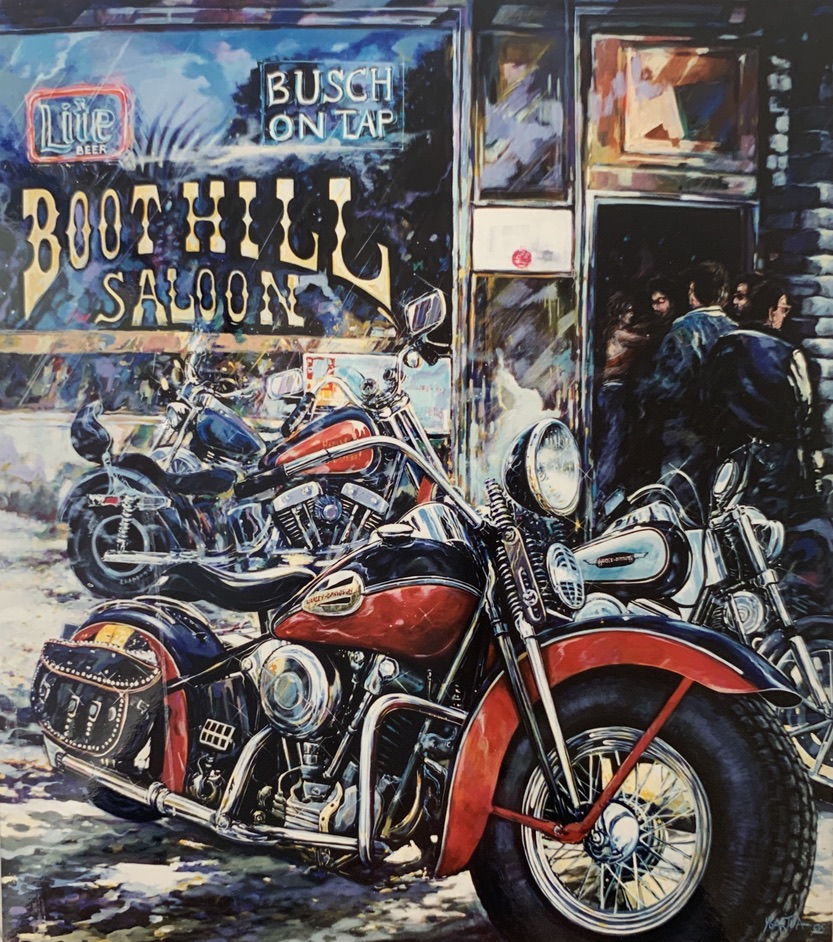 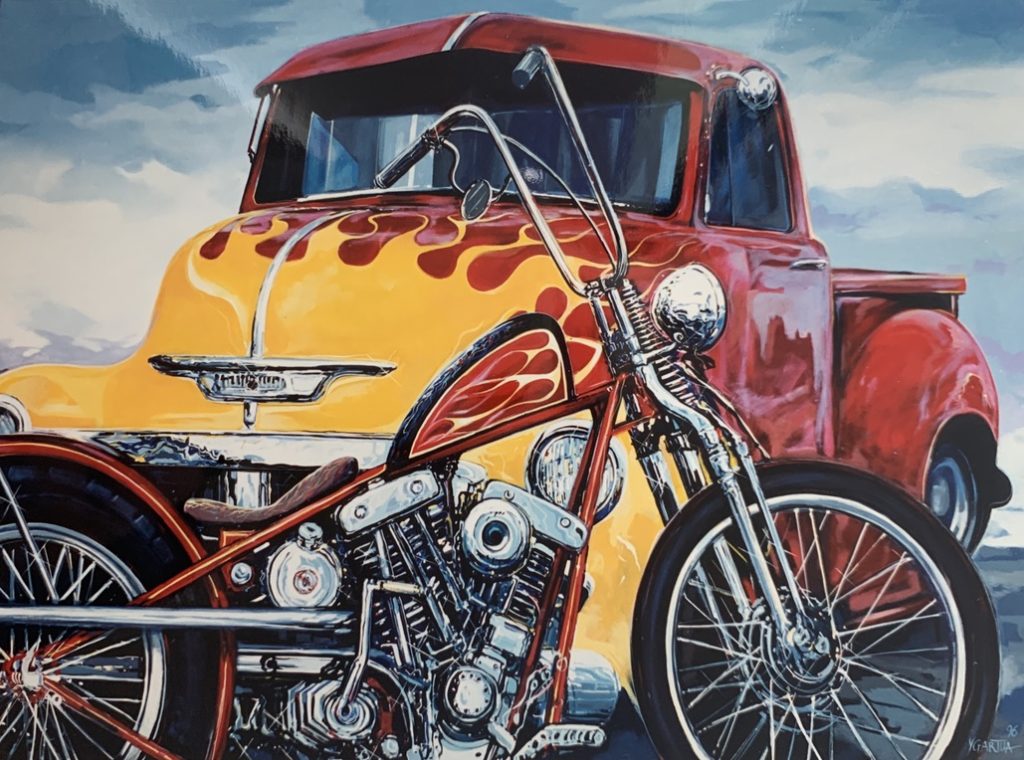 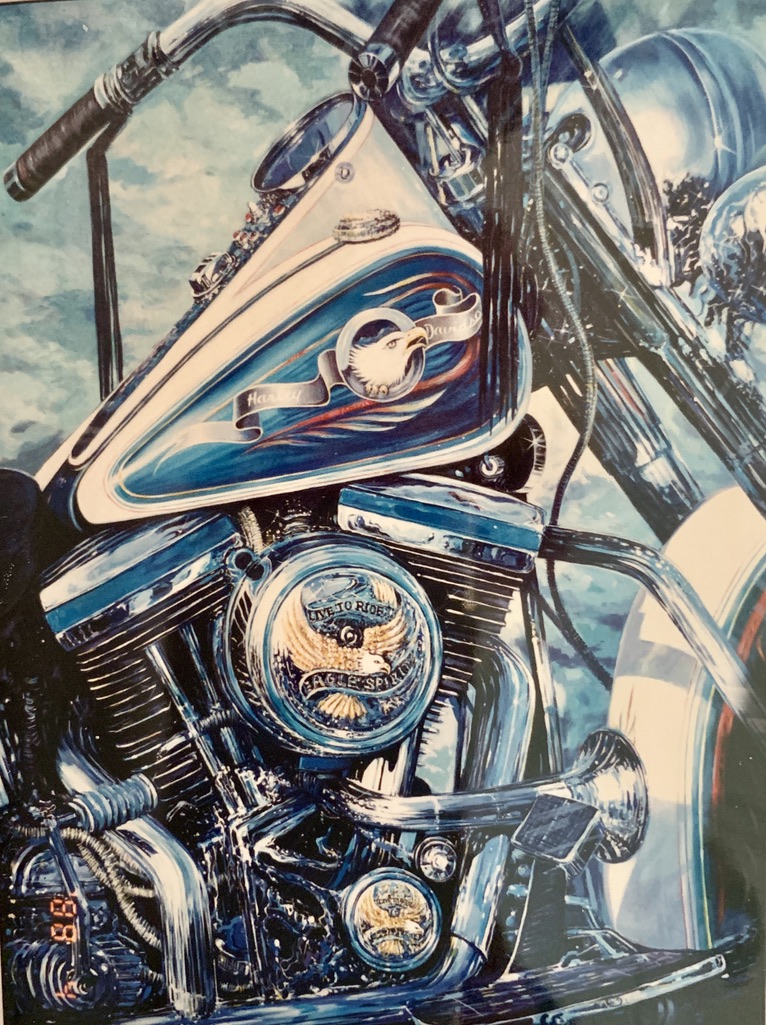 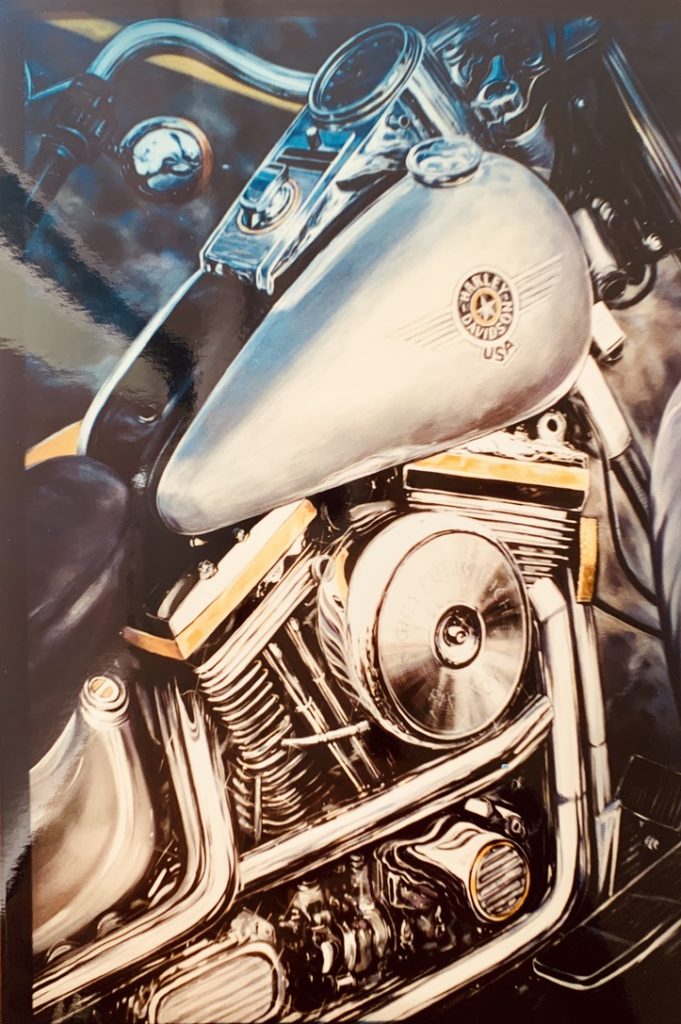 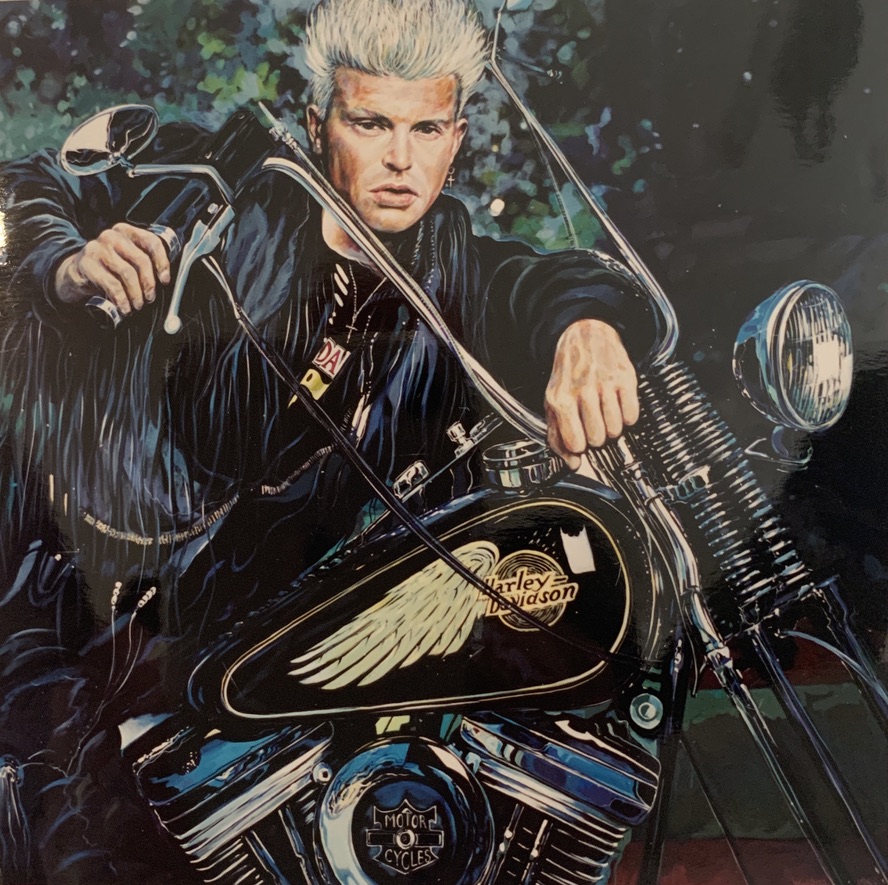 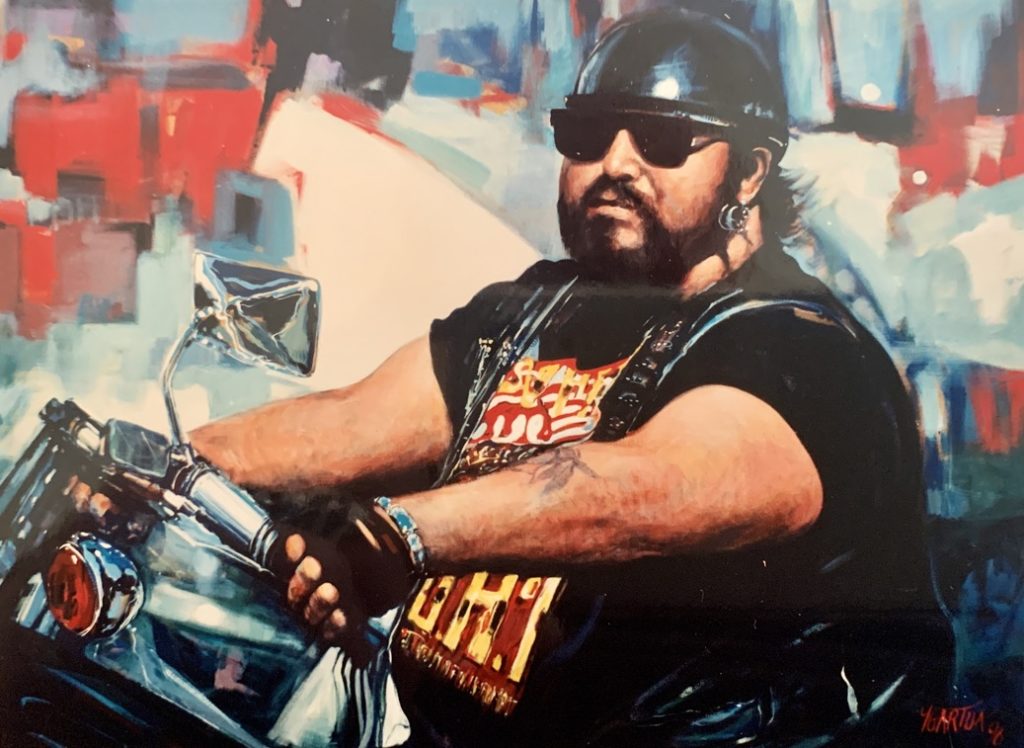 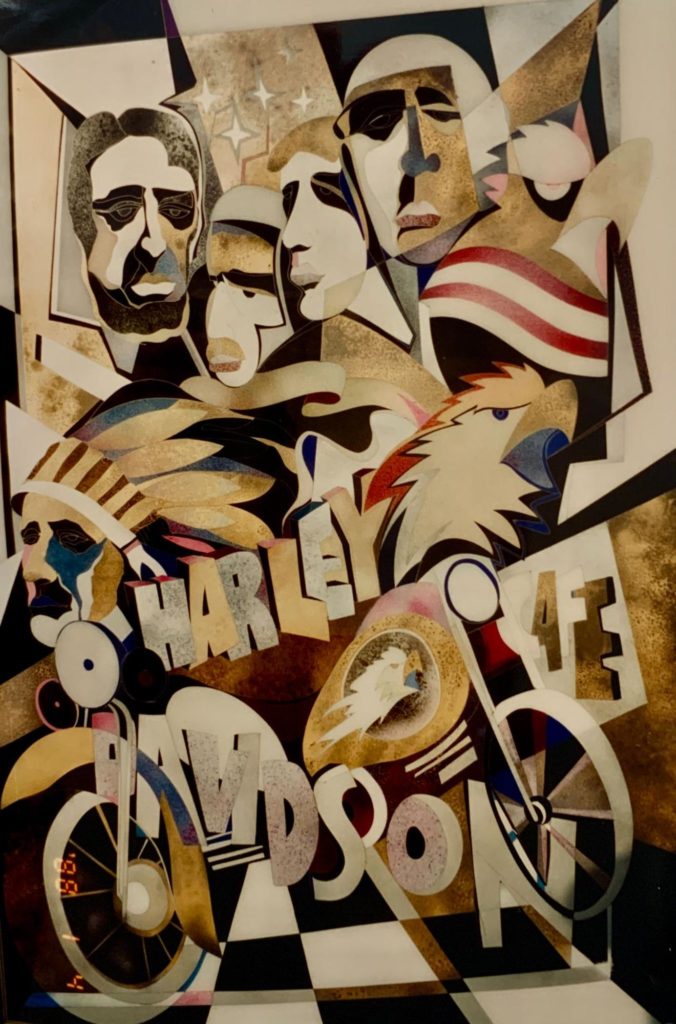 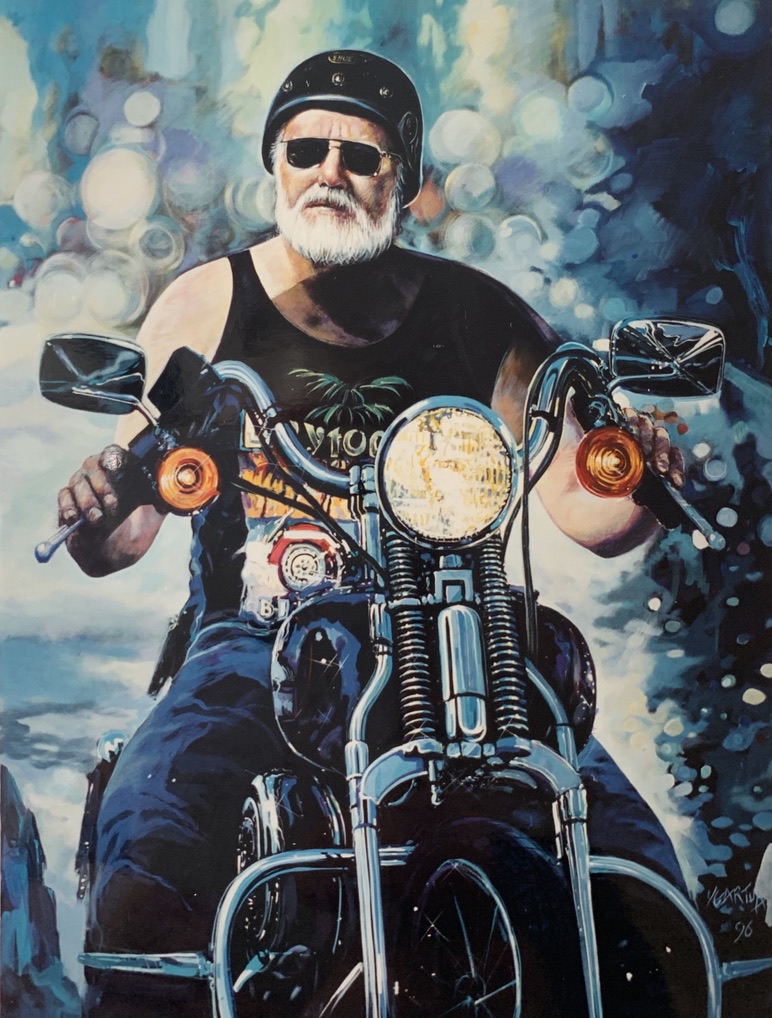 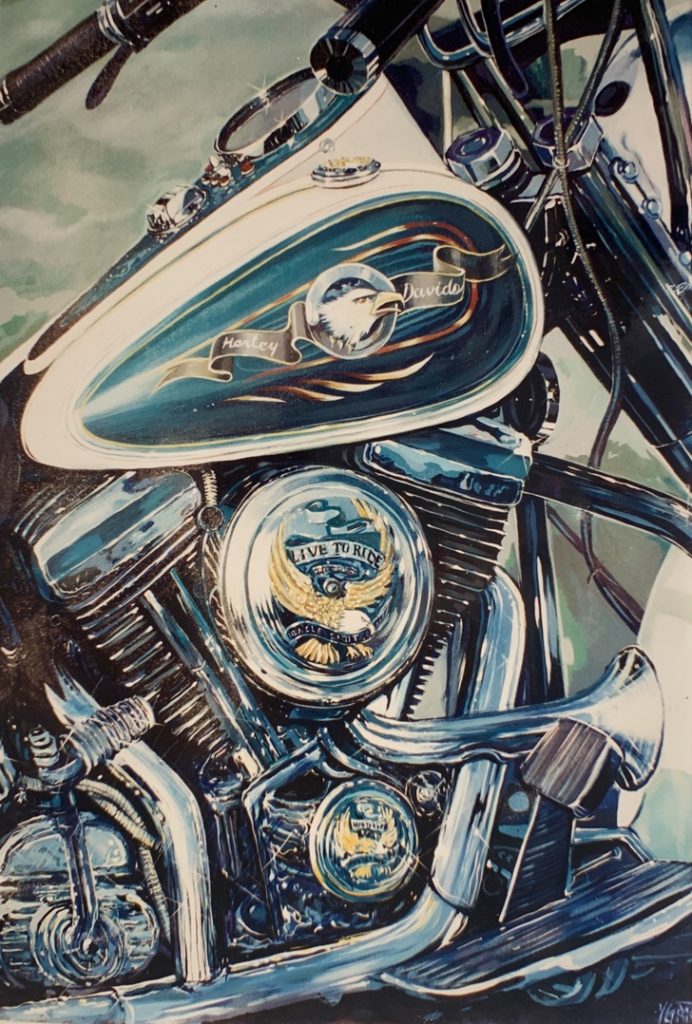 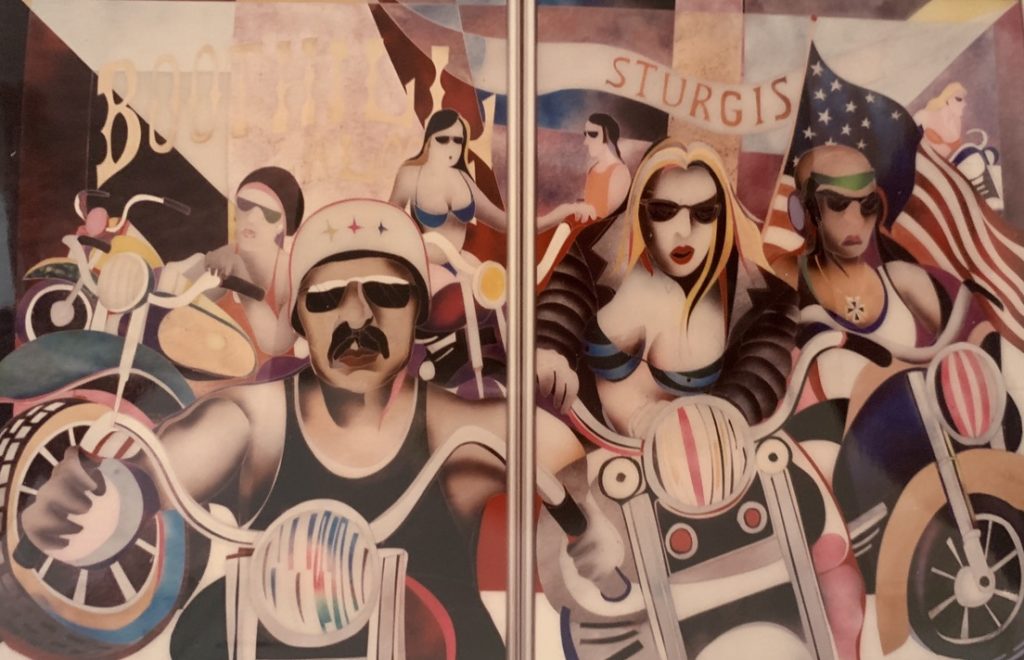 I mentioned previously that the owner of the 72 LA CROISETTE also had a Harley Davidson, and that one morning when he rode up in his Harley, Paul said:  ” Now that is the Real American Sculpture “ and I agreed, as long as you only do the Harley.  And all of a sudden there was a new idea born, just from seeing him drive up in his magnificent Harley.

That same morning we went round to the Sorbonne book shop looking for books on the Harley, bought a couple of books and then Paul started painting the Harley that same day.  The Harley was painted with intricate detail and I always remember saying, “How can you do the reflections of the stainless steel and the body of this bike without having some background.  Then Paul said well I am a silversmith and we had to draw our completed silver works at college, so I learned all about reflections and how to paint them.  It was a special technique to capture the shine and the sparkle and as we always say everything you learn generally you will use at a later date.

Due to the Harley Davidson new subject matter we then attracted a new group of Ygartua Patrons, they were Harley enthusiastic but came from all walks of life — from bankers, restaurant owners, business men to one of the oldest biker gangs in America — The Hell’s Angels.  In Europe we had avid fans of the Harley and we were invited to two shows in Cannes where Paul exhibited and sold his Harley Davidson paintings. We were also invited to the biggest rally, I think in Europe, in Menton on the border of the French Riviera going into the Italian Riviera. They are motorcycle mad in general in France, especially in the south as the weather is generally dry — same as Italy.

Paul painted the Harley for around 6 to seven years .  When we returned to Vancouver that year I looked into the Harley Davidson Motorcycle shows — these were a lot of fun and we did several over the years.  We were amazed at our clientele for the Harley, so varied.  We had one foreign owner of a bank and his wife wanted it for the Boardroom — well it does look cool, they commented.  Stockbrokers, business people, Harley fans, Harley riders and even the Hell’s Angels.

Some of these shows brought in people from back East; they would just drive their Harley here across Canada specifically to attend the show.  These guys are fanatics about their bikes.  We had the one artisan from Quebec City, and he loved Paul’s eagle on the plexiglass, don’t even have a photo of that, and he did beautiful leather jackets, pretty wild, as they were for the bikers. So, one day,  during the show, he came over and said Hey Paul, would you like to do a trade? So Paul got this wonderful handmade leather biker jacket and the high boots. Great outfit for the shows, and he even thought it was fine for Parent/Teacher night until Anton said, if you wear that, then I will not go out with you (well he was only young)– so kept for us and special occasions.

We did a special show at the Pan Pacific in 1996 here in Vancouver– at the time we decided that we needed  more open space as we also had a real Harley alongside the Grand Piano.

I had also done a poster only for the show, as we did not do limited editions of Paul’s work, it was mainly for the Expo and the Natives.  But I end up getting a call from the Harley people in the USA, saying we can not use their logo in a print form, so I couldn’t use those even to give out that night as a gift.  We were connected to a few of the Harley shops and they did know what we were doing as we were also advertised in the Harley magazine, the guy from Victoria, and he loved Paul’s work and bought the one that was in the ad in his mag. So it was quite exciting, the people you meet through the shows, but also the promo/business side — it was another world.

“As subject matter Paul sees the “Hog” as unique in its form and feeling “The Real American Sculpture” by a master of modern times.  He finds the challenge of capturing the Harley’s spirit and soul on canvas and inspiration and an exciting opportunity to create a new dimension in his body of work” (John Smith) Vancouver News, Harley Davidson Exhibition, Pan Pacific