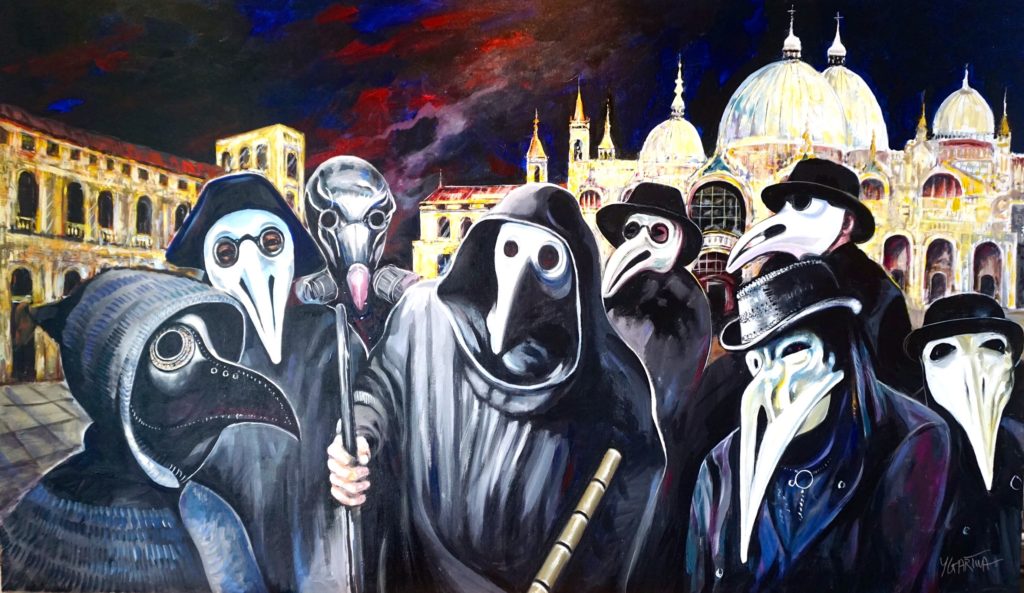 We are experiencing a global shift in consciousness as a result of this crisis.  The virus brings out the worst and best of us.  This is our test and while there are examples of how the virus can dehumanize us, there are also countless examples of how we can respond with the best of our humanity.” futuristgerd.com

There are historical moments when the future changes direction. We call them bifurcations. Or deep crises. “The world faces the prospect of a profound shift: a return to natural—which is to say, self-sufficient—economy. That shift is the very opposite of globalization. While globalization entails a division of labor among disparate economies, a return to natural economy means that nations would move toward self-sufficiency”

A hazmat suit (hazardous materials suit) is a piece of personal protective equipment that consists of an impermeable whole-body garment worn as protection against hazardous materials. Such suits are often combined with self-contained breathing apparatus (SCBA) to ensure a supply of breathable air. Working in a hazmat suit is very strenuous, as the suits tend to be less flexible than conventional work garments. With the exception of laboratory versions, hazmat suits can be hot and poorly ventilated (if at all). Therefore, use is usually limited to short durations of up to 2 hours, depending on the difficulty of the work.

“The Hazmat Soldiers made you realize how deadly this virus is, like a futuristic film, taking you into a new world with impending danger. The robotic aspect of the outfilts left one thinking of the future–Brave New World is upon us. The subject matter lends itself to a surrealistic approach creating intrigue and mystery.  A very impersonal presence, visualizing an image from another world, hence a graphic style rendering, to portray a detached persona.

To portray the history and the different fields of work that used the Hazmat Suit, I started with the fascinating Plague Doctor costume,(Angels of Mercy) France, Italy in the 17th century.  The clothing worn by plague doctors was intended to protect them from airborne diseases. The costume, used in France and Italy n the 17th century, consisted of an ankle length overcoat and a bird-like beak mask, often filled with sweet or strong smelling substances (commonly lavender) along with gloves, boots, a wide-brimmed hat and an outer over-clothing garment.”

The Miracle of Life is presented in “Next Generation” with surgeons in their Hazmat Suits to protect the Mother and the new-born.

The Battle — It is an out of this world experience—as if they came from another planet, reminiscent of Star Wars, it has a similar effect, drawing on ideas from movies and reality today. It is hard to imagine we are in the MOMENT of a disease which needs this type of apparatus. My celestialism that began in 1972 , when I painted creatures from other planets, also looked like they had protective gear on them, which helped me develop this new style relating to the COVID-19 outbeak.

Facing the Enemy, The Battle We Will Win, Soldiers of Hope, Our Saviours, Frontline Workers

Our soldiers in their battle uniforms – The Hazmat Suits – there to protect us from this deadly virus. 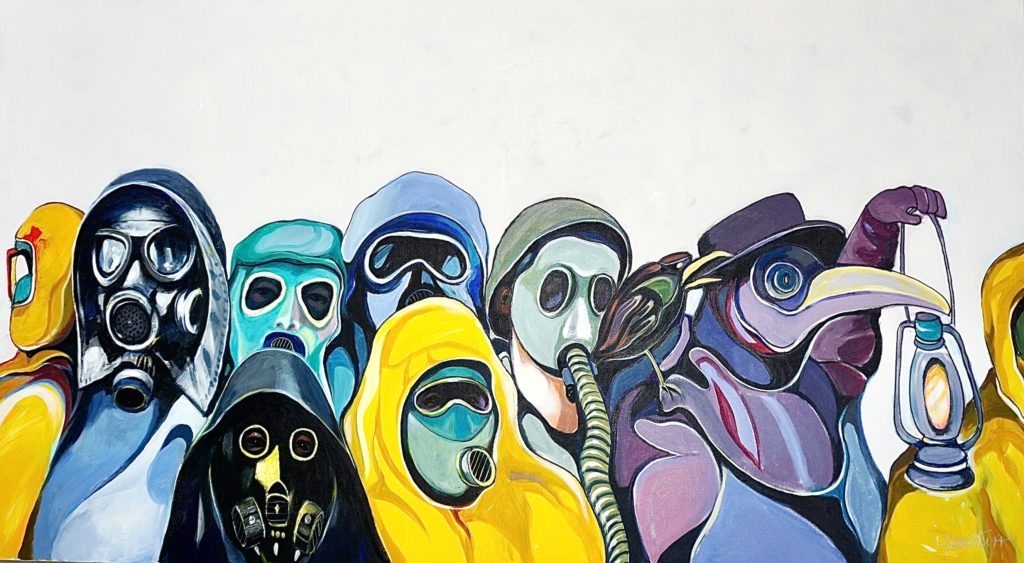 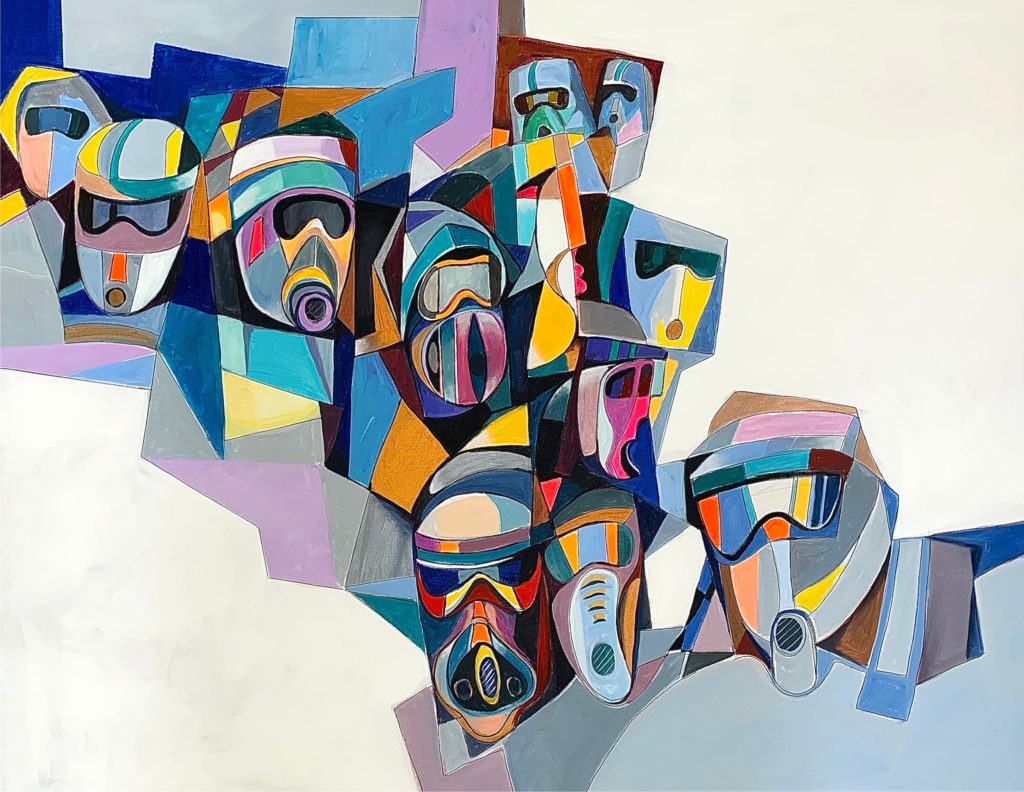 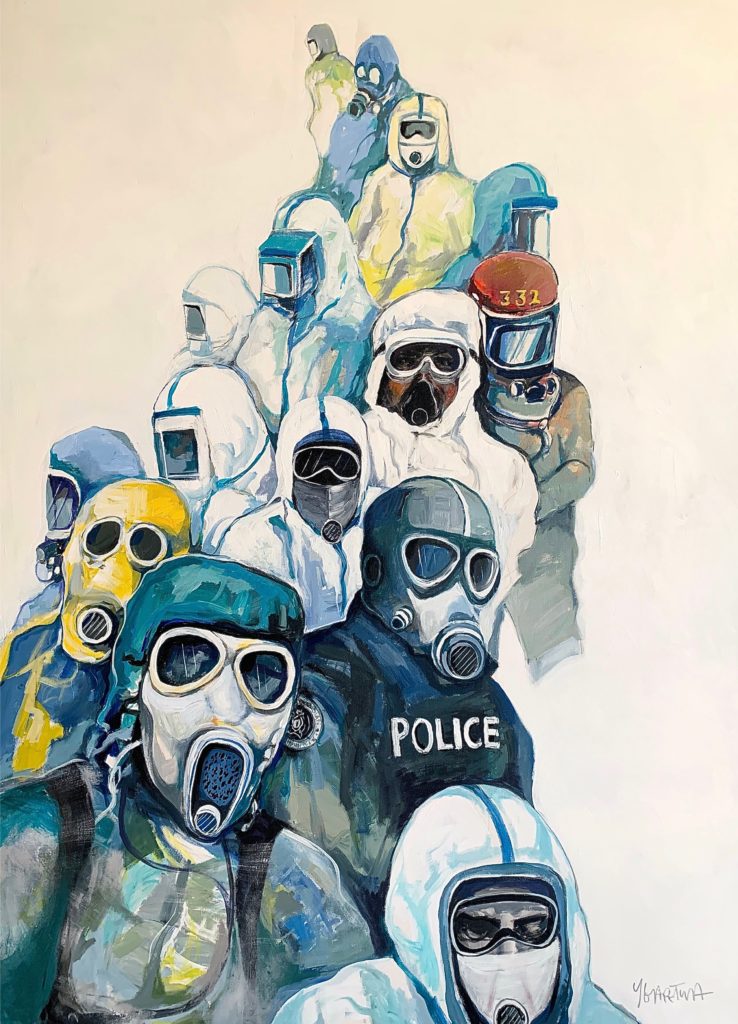 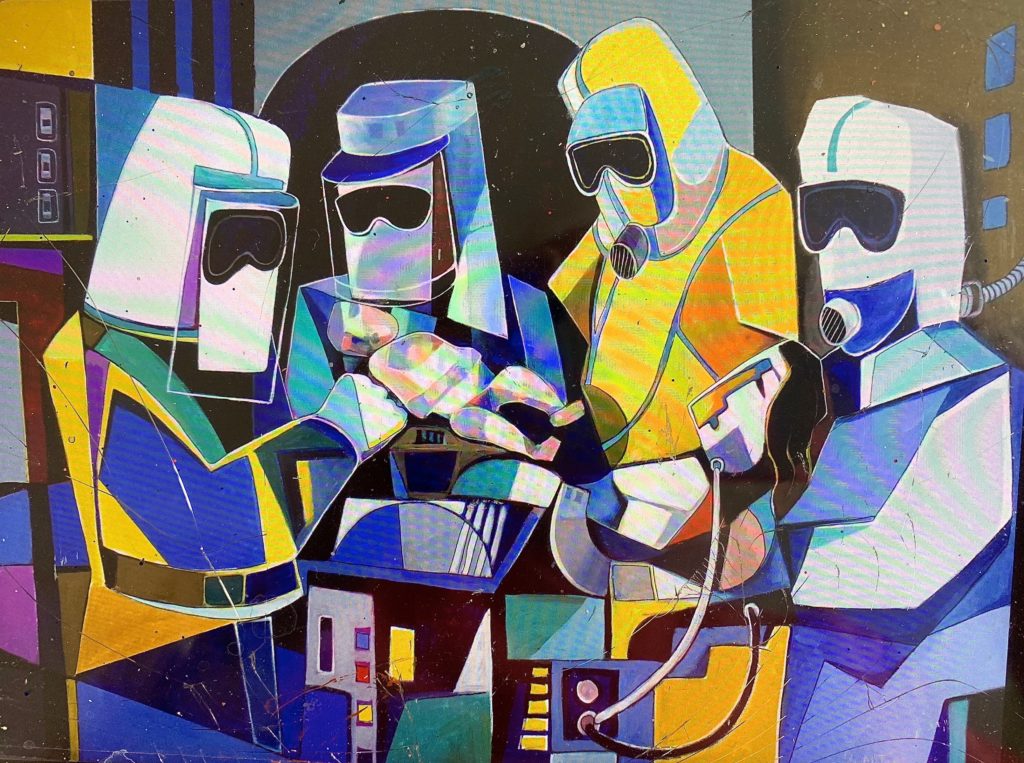 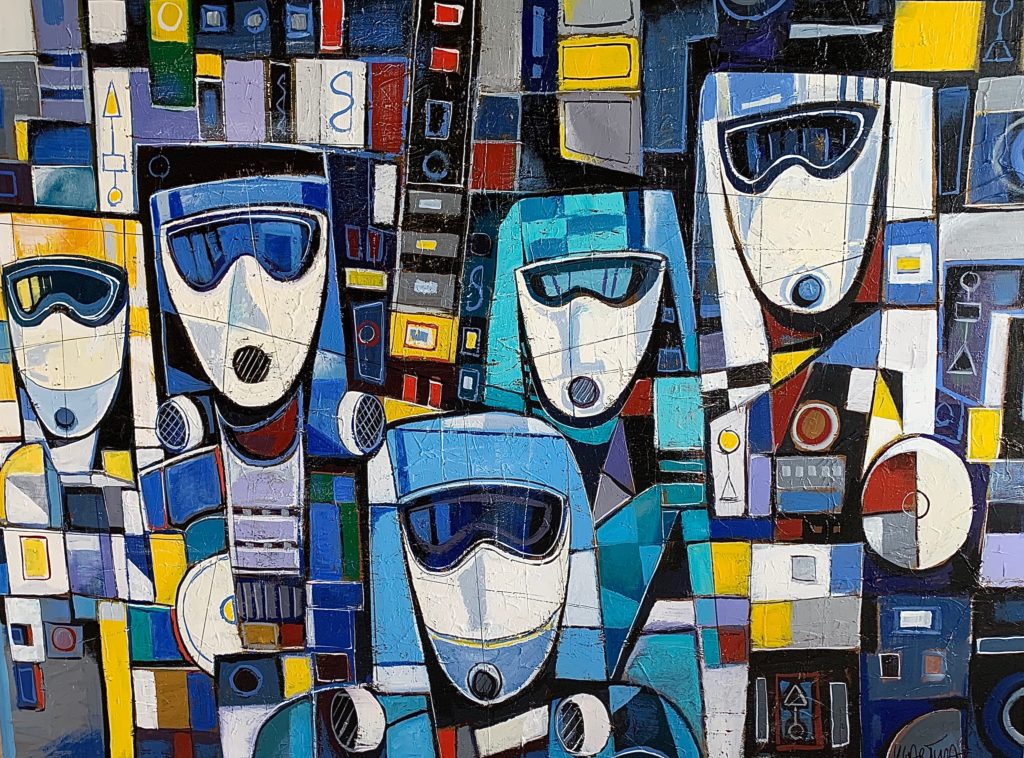 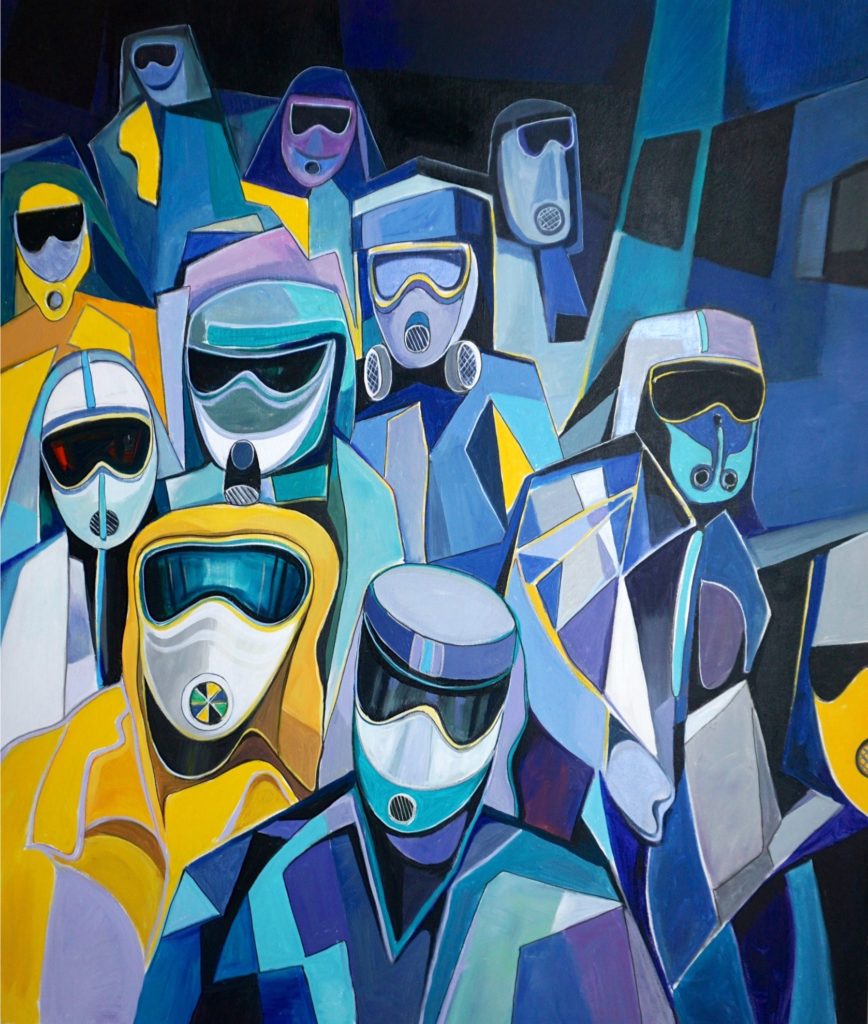 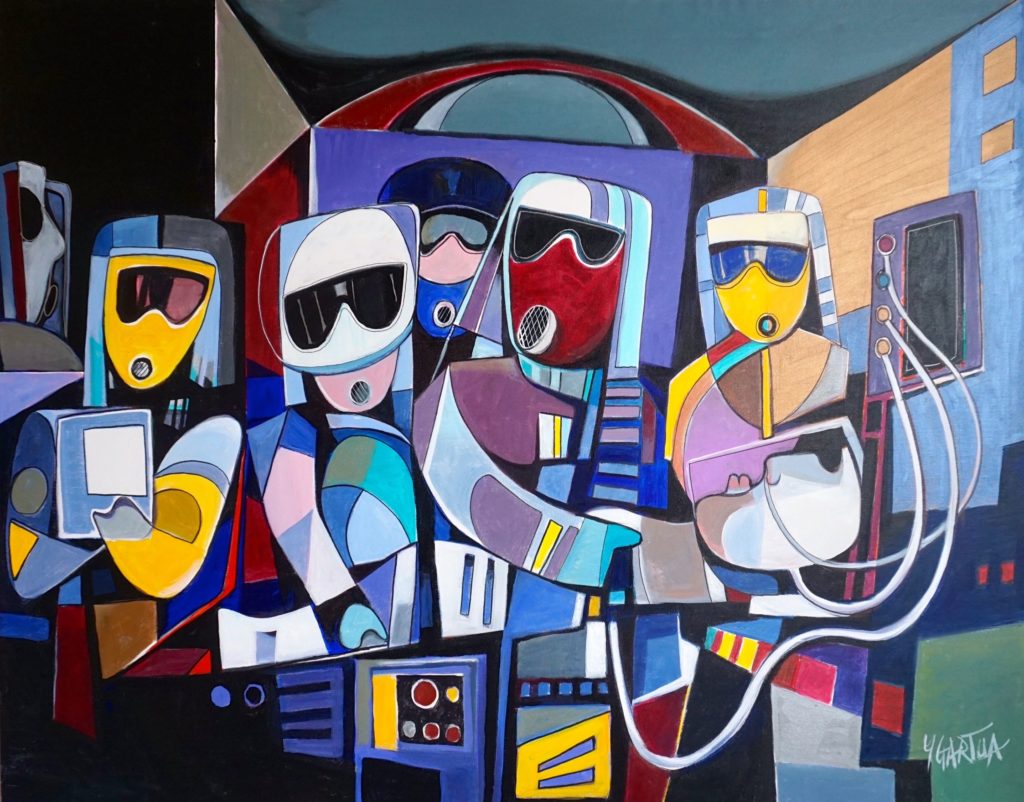