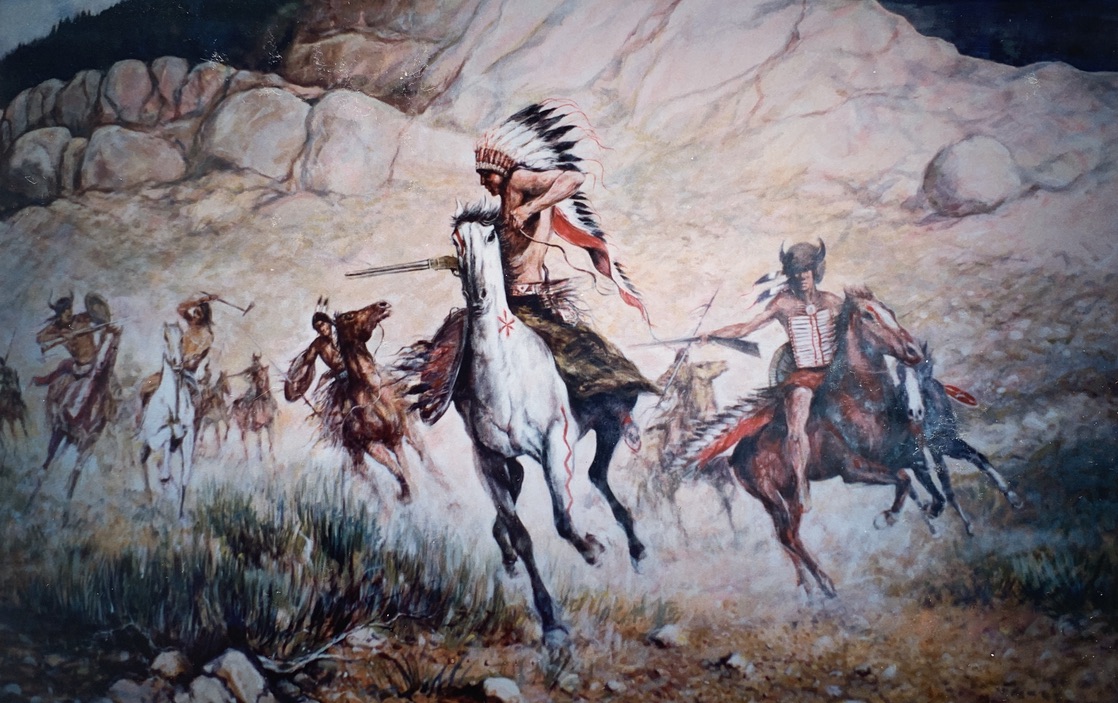 The first time Paul painted a Western Series was in the early 70’s in Vancouver, when his Father-In-Law decided to open the Apollo Gallery on West Broadway(April 1, 1970).  A local client commissioned him to do several copies of C.M. Russell, (early 1900’s)the famous American artist of the American Old West(the cowboy artist). Once again, even though he had never entertained the idea of this subject at the time, he approached it and just like that, it was as if he had been painting the Old West for years. (we have not been able to locate these photos of this Russell Series)

Then again in the late 70’s, Paul  was resident artist in Scottsdale Arizona (Camelback, La Posada Inn) at the De La Mano Gallery– where he painted the natives from the area, the Hopis, the Navajos, the Desert People, Sonora Mexico.   But we were in cowboy country, so once again he was  commissioned to do studies of  the Great West.(no photos available)  Scottsdale is known as The West’s most Western Town. 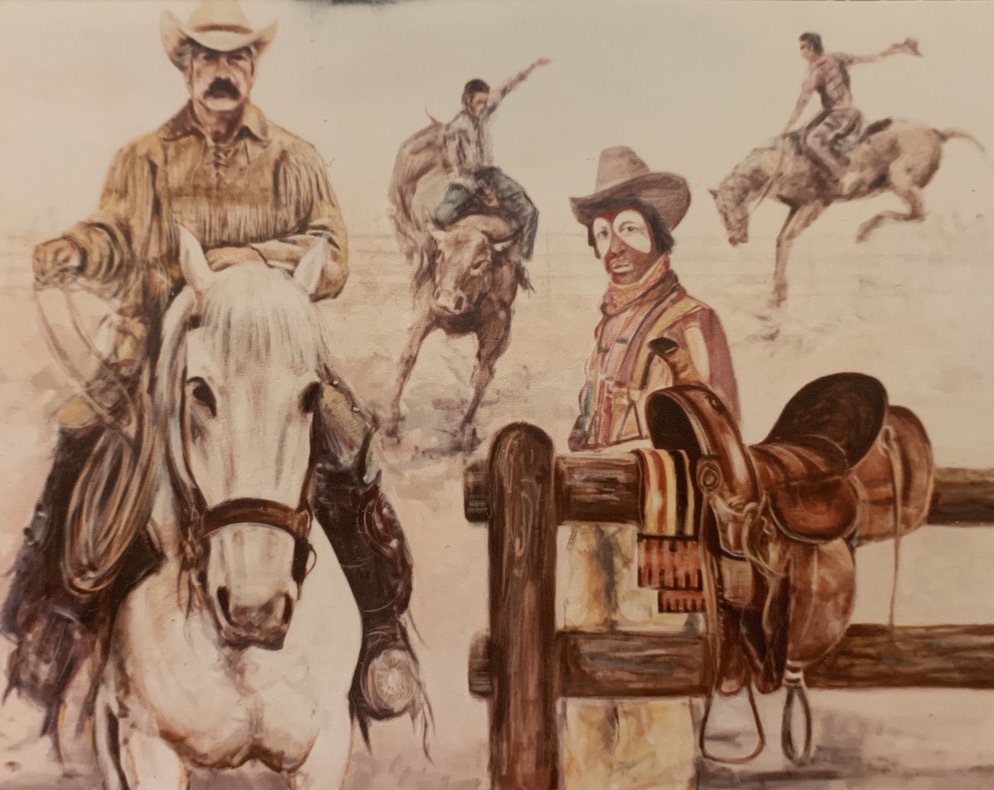 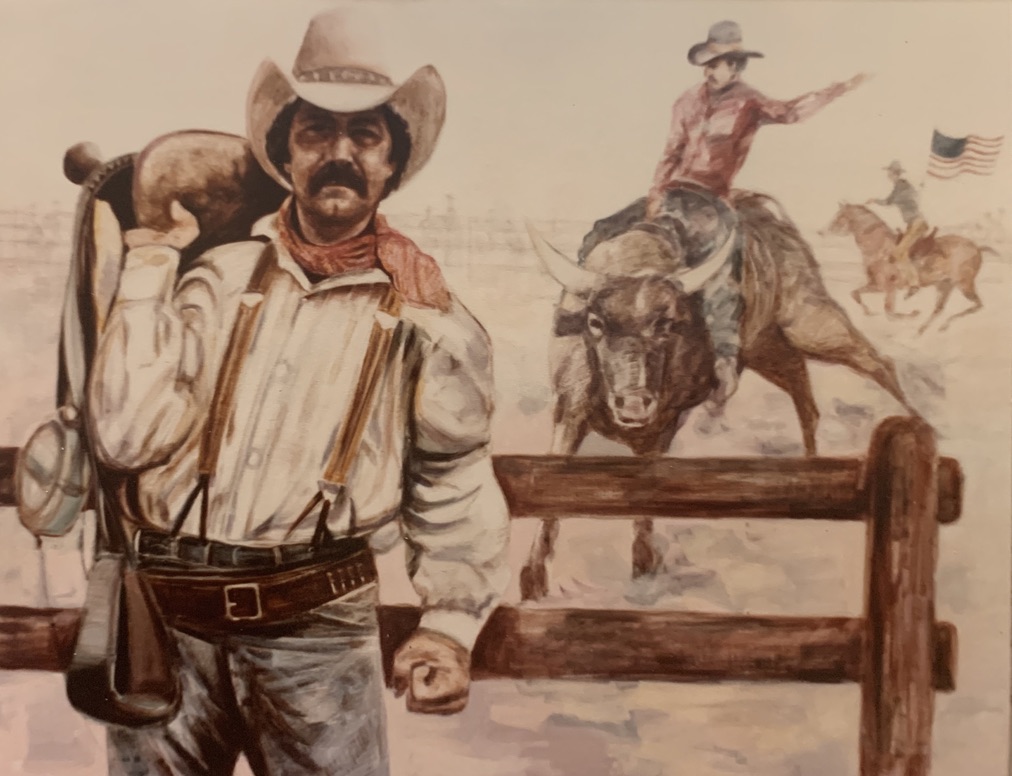 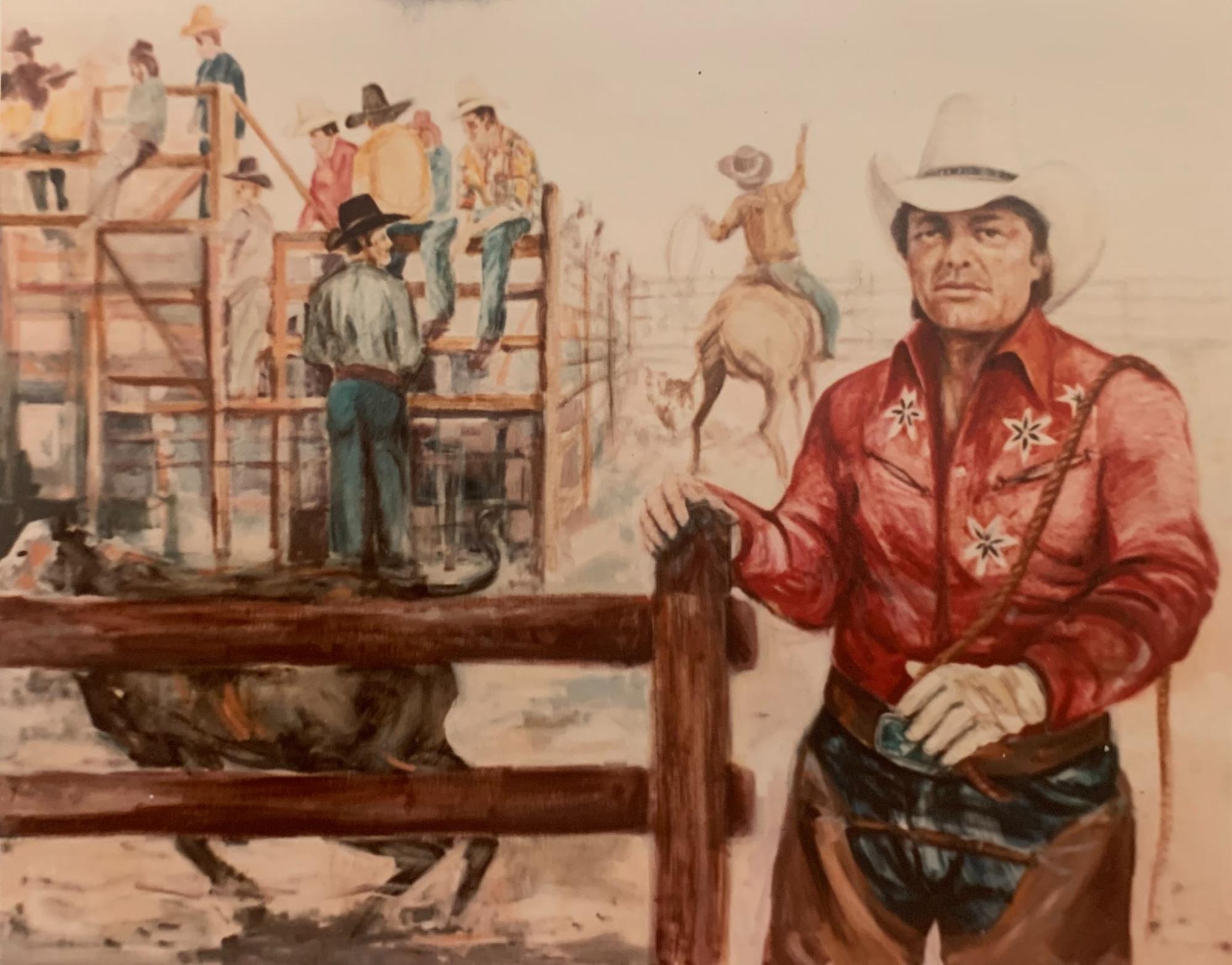 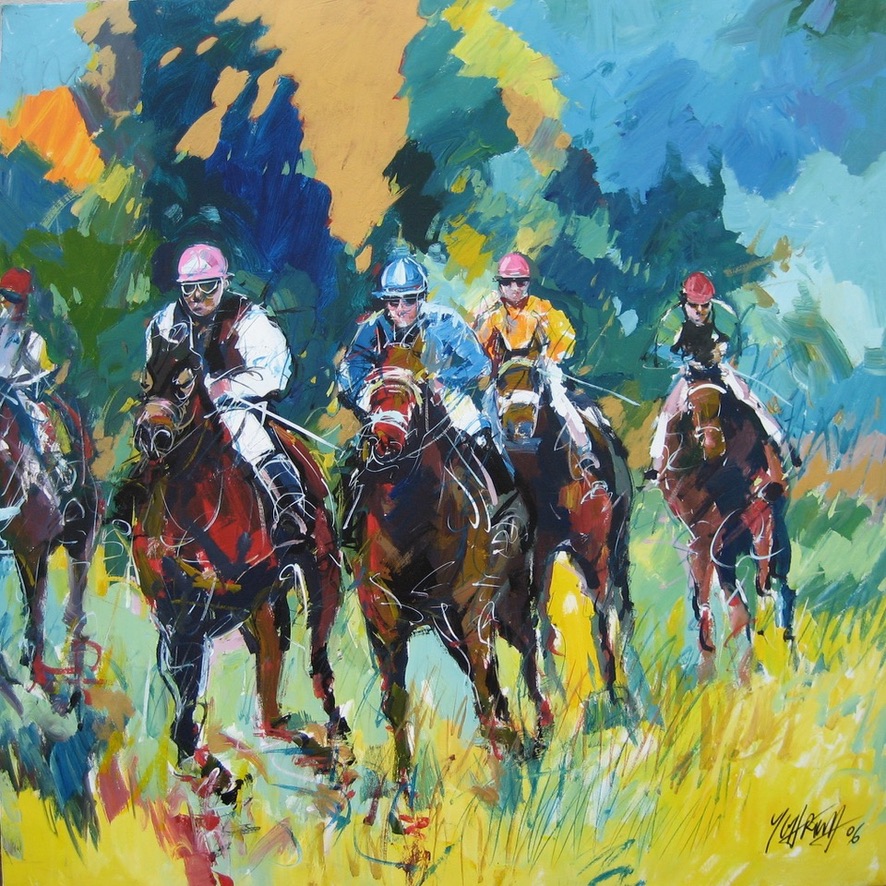 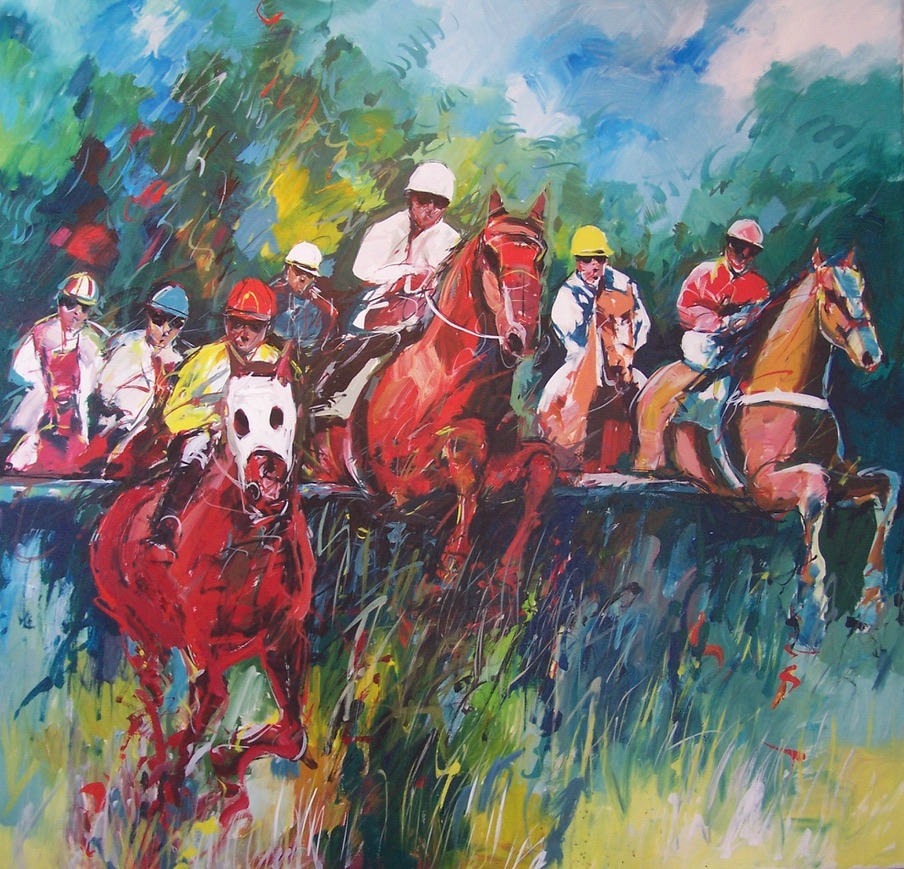 His first Horse Race plexiglass painting, and I believe he only did two on plexiglass, was painted in 1987 in Quebec City where we lived for one year – Tala and Anton were attending the French elementary school Saint-Roch bordering the river Saint Charles, right in the centre of Quebec City. The Starting Line(Plexiglass) 1987 was entered in an exhibition at the Canadian Federation of Artists in Vancouver and won Honourable Mention. During our sojourn in Quebec City we made contact with the GALERIE LUMINEUX , Rue ST Paul and Ygartua was represented there in Quebec City for the following ten years. 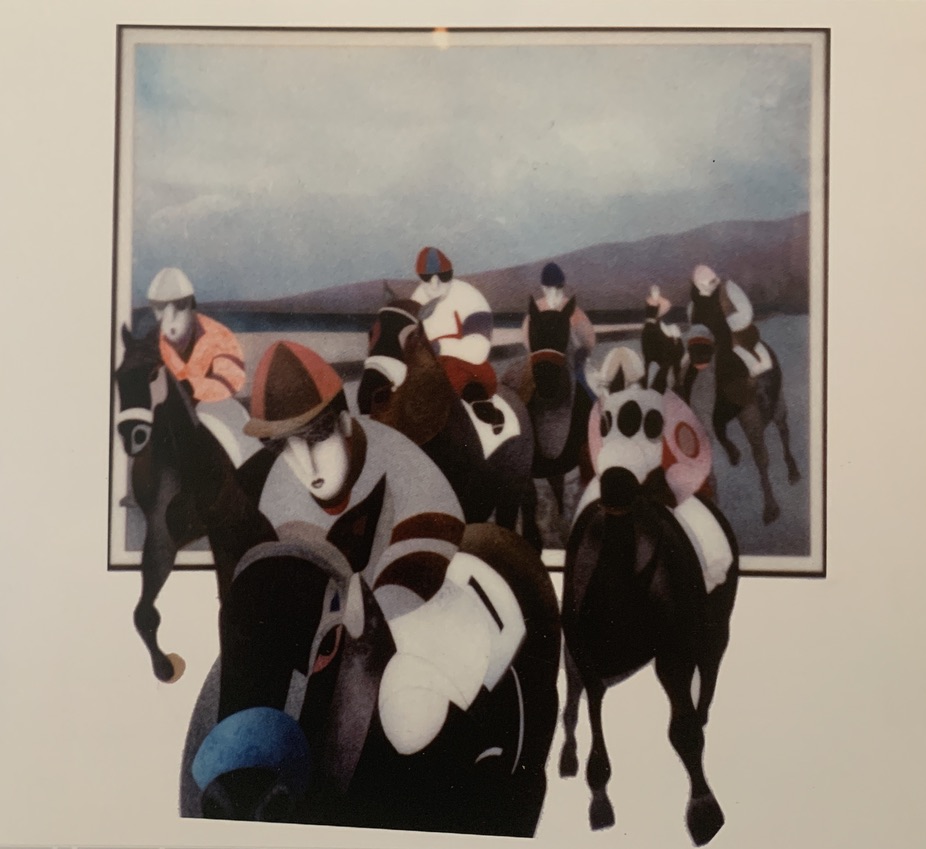 Future Conceptualism is a revolutionary technique developed by Paul Ygartua. It is a technique of reverse painting on transparent plexiglass, similar to Cloisonne Enamelling. This was an ancient method of the Chinese (whose history can date back to over 500 years) whereby a single line is etched out depicting the subject matter. Then each area is painted separately, creating a collage of colour in a mosaic effect.

This is a complex technique, conveying a powerful presence. A mixed media mosaic cubistic style inlaid with gold or silver, creating the design and separating the colours. It is a distortion of the subject matter, an original abstract with a sculptural effect. The element of lucidity is created through colour separation combining fluorescent metallics, enamels and acrylics. This medium I developed in 1986 and continued developing this style till the early 90’s. It is just recently that I have re-entered the challenge of working with this extraordinary medium which allows me to experiment more with my design concepts creating an ultra modern effect. 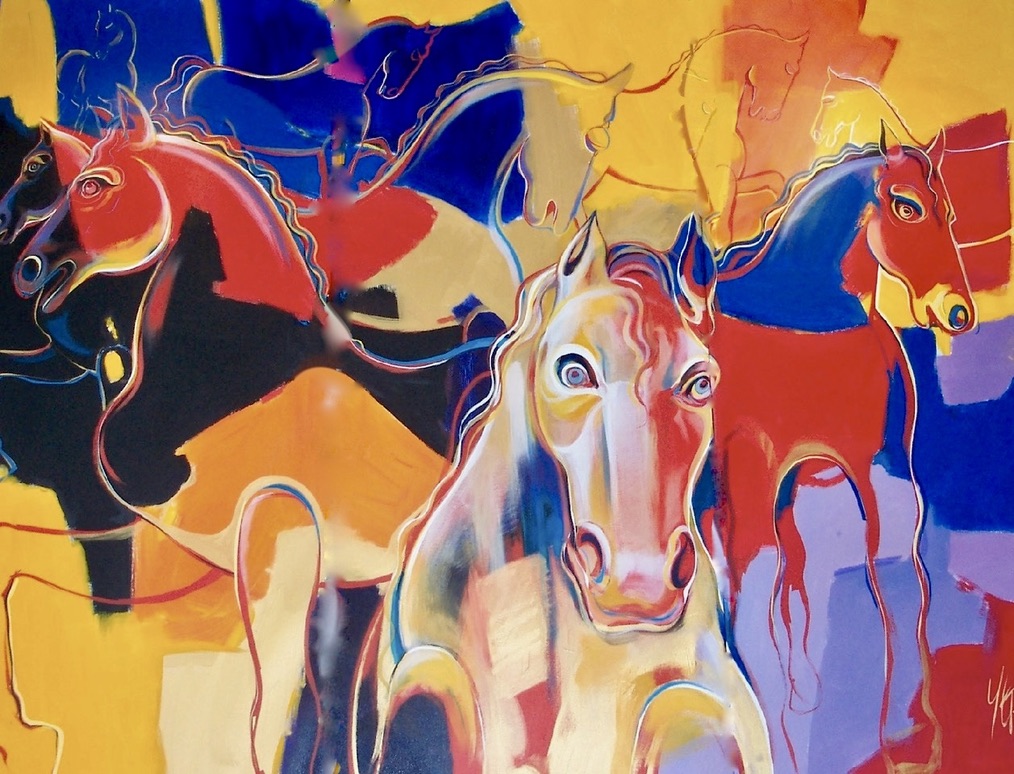 At the beginning of the Millenium in Vancouver we met clients from Mexico who owned white race horses. Our client came to the studio with his entourage, and at the time Paul was working on a very large painting and they immediately said “ Great it must be that size”.

They commissioned Paul to do a large Triptych of their beloved white stallions – it was very personal and they explained in detail that they  wanted a painting depicting their love and respect for these extraordinary creatures. They  adored Paul’s abstract expressionism and asked him to do a large triptych of their champions. It had to have red, yellow and blue – the passionate colours of Mexico. Their energy, their force and power was important to portray along with their natural grace and beauty. It was interesting as they did not direct Paul, they loved his work, they knew he would create a masterpiece – which he did.

During the 90’s Paul painted many horse races for our Torontonian clients at the One of A Kind exhibition – always portraying the movement of the race, one could feel it, the energy, their immense beauty and elegance– one became mesmerised.