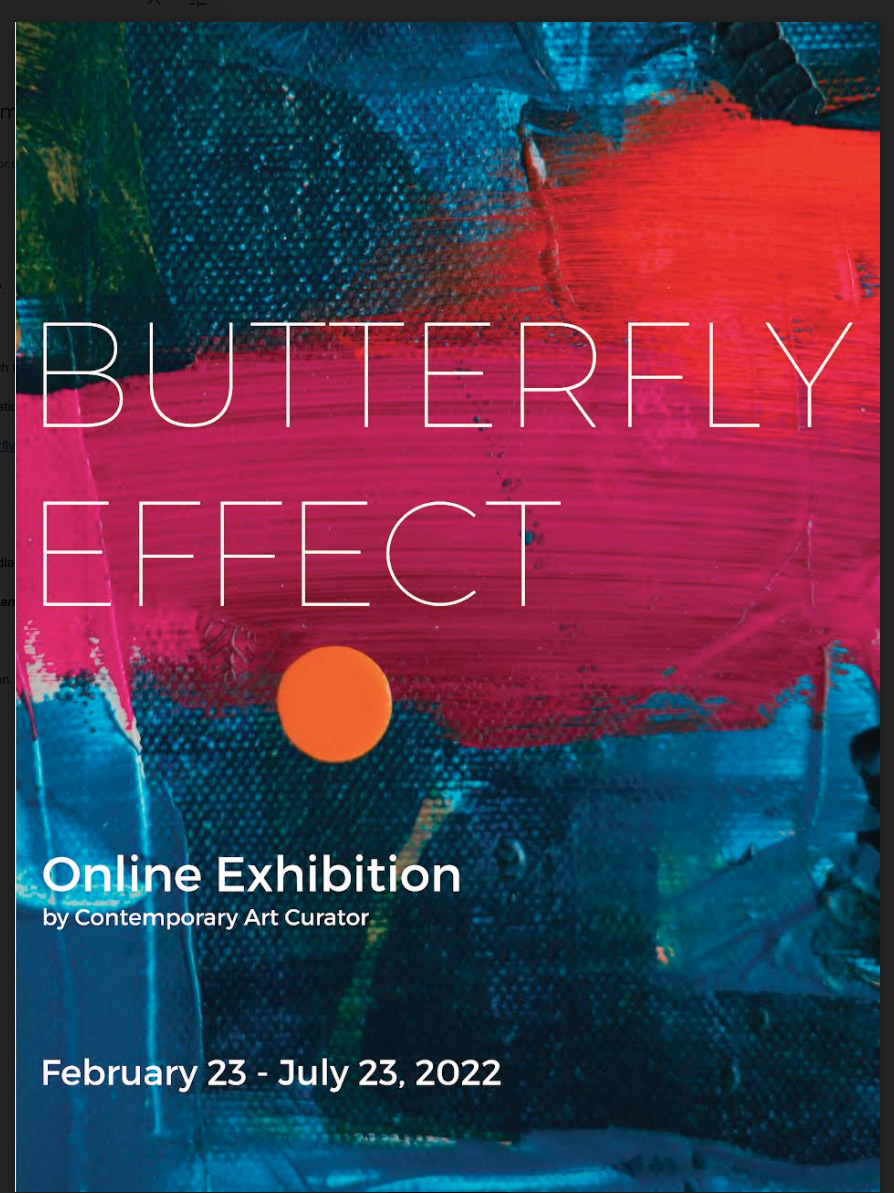 Contemporary Art Curator Magazine has established its name by curating the best contemporary art from all around the world. It is one of the top online contemporary art magazines (750,000 unique monthly visitors) with thousands of followers from all over the world, with content updated daily with articles and interviews. Our followers are art collectors, magazine editors, curators, gallery owners, art dealers, bloggers, artists, and art lovers.

The exhibition is aimed to connect the world’s most talented artists with art collectors, magazine editors, curators, gallery owners, art dealers, influencers, art lovers and show your art to thousands of people worldwide.

The ‘Butterfly Effect’ idea shines a light on how a simple action, such as the flapping of a butterfly’s wings in one part of the planet, can spark a cascade of events around the globe.

The ‘Butterfly Effect’ concept originated from Edward Lorenz’s Chaos Theory, which explored the idea that no matter who you are, you can significantly impact the world.

Art can affect social change; it can provide people with a voice. Art has the power to arouse emotions in those who see it, leading them to rally for change.

Contemporary Art Curator Magazine has established its name by curating the best contemporary art from all around the world. It is one of the top online contemporary art magazines (750,000 unique monthly visitors) with thousands of followers from all over the world, with content updated daily with articles and interviews.

He was born in 1945 in Bebington, Cheshire (Liverpool)England. After graduating from The Faculty of Arts Industrial Design, Liverpool Art College in 1965 he immigrated to Vancouver, Canada. From then on painting became his sole existence.

Paul Ygartua is a painter and muralist with bases in Canada, France, Spain and England. He has single-handedly painted some of the largest public space murals in Canada and the United States. His most famous works are his “Heritage Series” depicting North American Natives (Native Heritage Mural, Chemainus, BC) and other ethnic and cultural groups. He is renowned worldwide for his monumental murals. “The World United ” (100ftx25ft/3,048cmx762cm) being one of his most notorious, commissioned by the United Nations for the United Nations Pavilion at the World Expo 86 Vancouver and his largest to date “Legends of the Millennium”, over 9,000 square foot (24ft x 390ft / 731cm x 11,872cm).

OUR EARTH ANGELS
A Homage to the Heroism of Health Workers Worldwide
“Art nourishes the soul – I feel connected when I am creating, it is my life force, it is my joie de vivre , every hour, every day—to (access) tap into the subconscious and bring surreal worlds to life.”

NEW VISION – A NEW WORLD
The Dream – often surrealism and fantasy art is explained by suggesting that the artist is under a spell of hypnosis whereby only then he can enter the World of Fantasy and Make-Belief. Either Ygartua is constantly in a dream-like state when he is awake, or he just has a vivid imagination that he can tap into at any time he chooses.
Ygartua has simplified the dream-like state, he says:
“I do it while I am awake, that way, no problem recalling—I contemplate and try to imagine different situations, unique ideas, unusual creatures that could be working together with the virus, similar to that of the pilot fish that assist the sharks in their close relationship as the clean-up crew. I like to reveal the darker side with a positive in the same painting. It is like a chess game, the game of life. The name of the game is to win, to survive. The objective is to win, but the challenge is designing and then acting out a strategy to achieve that goal—as in life, you must constantly evaluate and change your playing strategy.

THE COVID ENCOUNTER
Pandemics are notorious for upending all of society and artists are notorious for creating their art under the most perilous and inopportune circumstances.
“Interpreting and painting my thoughts about the Coronavirus is a constant battle between good and evil and it is a 24hr day imagining even before I go to bed at night what different aspects the virus effects. I try to imagine the more positive approach to battling it; through our heroes we see how humans battle the virus, which made me think about what other creatures create fear in every living being. The shark comes to mind and I started to relate the virus to the dreaded shark of the ocean, (as they are both killing machines, out of control) which every creature is afraid of, except for the small pilot fish who work as caretakers.
I was quite intrigued with the pilot fish who are the caregivers for the shark, as they service the shark by cleaning them and keeping all other annoyances away from them, enhancing their relationship whereby they become dependent upon each other – it reaches a point where they become so close, that even after a sharks death, they hang around still searching for their host. I was curious to visually study the up-close photos of this dreaded disease, it encouraged me to do some research on the visual presentation of these cells –it enticed me to look further, been drawn in on the mystery– I started to enter into a dream like state, applying my imagination to transform me onto the battlefield– it was like I was facing the war, the challenge to win-over and conquer this cruel beast. This is where my idea of the COVID Series paintings was invented.”

YGARTUA TRANSFORMS, DIVERTS AND RECONSTRUCTS CONVENTIONAL REALITY TO GIVE US A NEW AND UNIQUE VISION OF THE WORLD
YGARTUA’S FANTASY SERIES (Under Siege)

It is elusive and unpredictable, yet it will be defeated–We Will Overcome, We Will be Victorious

Ygartua takes you on a journey to the imaginary global kingdom of COVID-19. He envisages the Coronavirus with teammates (similar to that of the pilot fish that help the shark) spreading this dreaded virus from one city to the next.

We have a predator that came from the depths of the cosmos and took over the order of man. We are its prisoners–it is out there, like soldiers free to travel the world, but they will soon meet their fate, the intervention will be upon them.

Ygartua’s whimsical approach highlights the volatility, the unpredictable manner in which this virus conducts itself—changeable, volatile, erratic and elusive. He portrays the virus in all our cities of the world–from the Trevi Fountain in Rome, to Notre Dame with the Gargoyles in Paris, Gaudi in Barcelona, St. Basil’s Cathedral in Moscow, Time Square, New York, Piccadilly Circus, London.

In a globally-connected world, we are obligated to each other to find a solution, to share our discoveries and work together to conquer this unbelievable, unimaginable beast.

To all our doctors, nurses, healthcare workers and all our essential workers out there, we appreciate you and thank you.