I was commissioned to do a copy of Scotland Forever!  Scotland Forever! Original painting by Lady Butler (1881). The first thing I do is sketch it out, using a pencil, drawing the detail, getting all the proportions correct–this is the most important thing, thereafter it is just painting it.  The subject matter is exciting, the movement of the horses, the wonderful military regalia–the white horses were of particular interest along with the composition – it was quite a thrill to reproduce this glorious painting.  Considering I copied the Mona Lisa three times , everything is easy after that, as the art world critics always claim that the Mona Lisa’s  smile is impossible.  In the end it is detail, background composition, balance and colour. 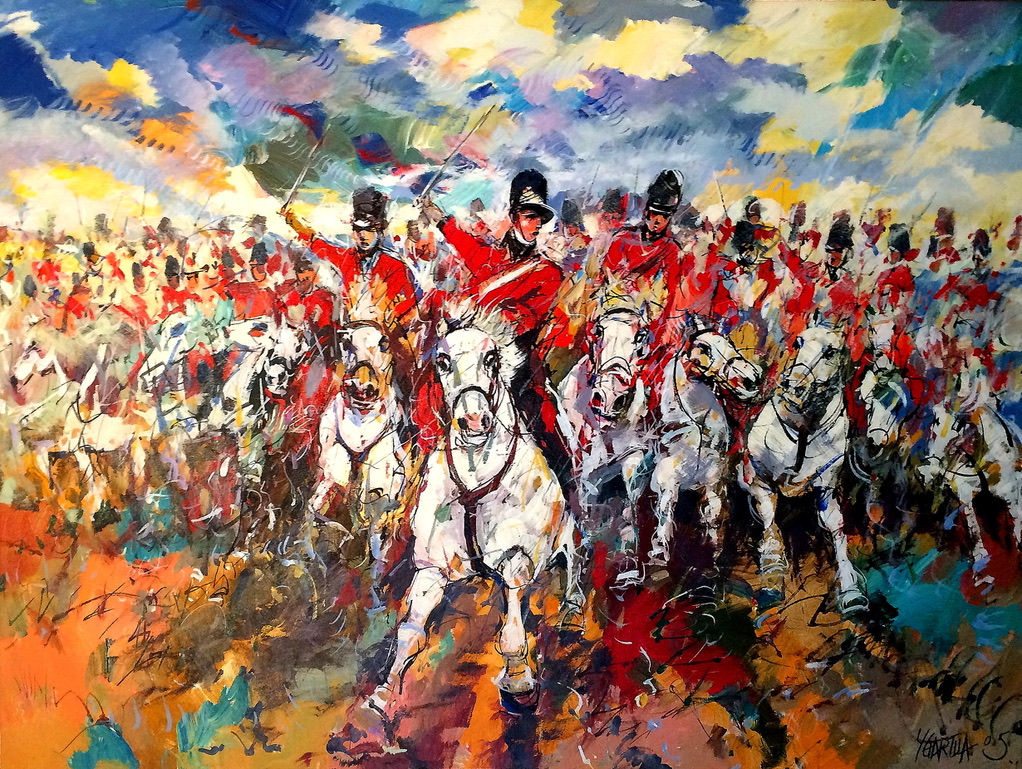 The Royal Scots Greys was a cavalry regiment of the British Army from 17O7 until 1971, when they amalgamated with the 3rd Carabiniers to form The Royal Scots Dragoon Guards. The regiment’s history began in 1678, when three independent troops of Scots Dragoons were raised. Wikipedia

“I was then commissioned to do my own version of Forever Scotland, this was a smaller(36×48) expressionist style. The freedom of  expressionism is vital with this style and subject — when I can let myself loose, just go with the flow,  it took around two hours.  This is a style that I have always enjoyed – it is unadulterated creativity as it is always the  first stroke that counts and there is no going back until finished.”

“A greater example of his talent was when a mutual friend, who is a collector of Napoleonic memorabilia, wanted a 3’x 6’ painting of the Scots Greys charge at Waterloo (a La Elizabeth Butler). I showed the concept to a few artist friends who baulked at the enormous project, quoting weeks or months for completion. My friend approached Paul on Saturday while having dinner at my home, about doing the job. He said he would fit it in the following week, because it looked like an interesting challenge, and would have it delivered on Thursday. On Thursday morning (Paul seldom misses deadlines) we had the unveiling. Seventeen horses and riders coming right at you. Every hoof, torso, leg and arm perfectly foreshortened. A tour de force. I’ve heard whole essays have been written about Rembrandt’s foreshortening of the watch captain’s outstretched arm in the “Night Watch”. One day, essays may be written about Ygartua’s “Scots Greys”.

I’ve often compared the experience of watching Paul work, and discussing it with him while he works, to being in Hemingway’s studio or at Beethoven’s piano while they composed, freely asking questions about each line and the creative process. It is a rare occurrence to find an artist/creator of Paul’s caliber, with whom you can do that. Knowing Paul Ygartua has been one of the most fascinating experiences of my life. I hope this book will allow more art lovers to know one of the great masters of today.  YGARTUA  https://www.worldofartmagazine.com/Album_Ygartua/Paul_Ygartua-224-pages.pdf