Queen of the United Kingdom and other Commonwealth realms from 6 February 1952 until her death in 2022. 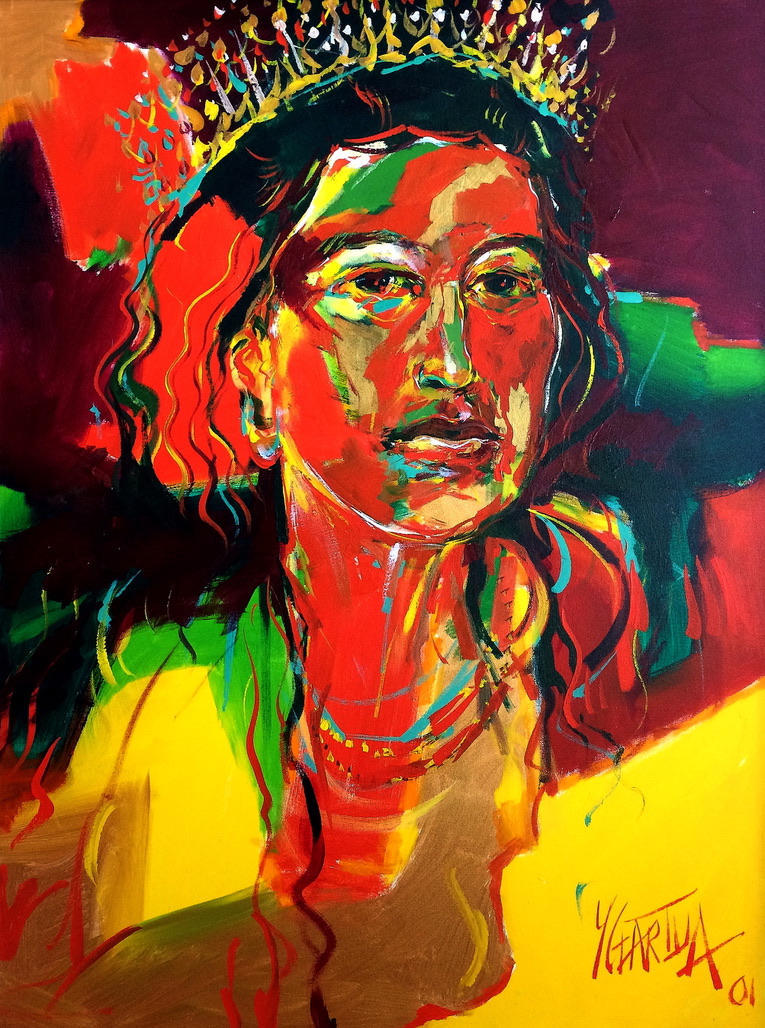 “In 2001 there was a brief and famous controversy about a portrait of the Queen by Lucian Freud. At the time Paul was the subject of a solo show in Vancouver, Canada. In a few minutes, in front of an audience, he created the painting above as his contribution to the discussion.”

The Art Historian, Michael Silverbrooke has categorized this work of art HER MAJESTY THE QUEEN as Fauvism or Expressionism–the two mediums express a dominance of color and movement making a powerful statement.

Ygartua’s portrait of Her Majesty Queen Elizabeth ll is intense and powerful. It portrays an exuberant optimism, a woman who exceeded all expectations. The strength and character of the Queen is brought to our attention through dramatic  color combinations which portray the boldness, the inner strength and fortitude of the Queen. Ygartua’s strokes are bold and daring, with no hesitation, giving  the viewer an insight into the artist’s artistic perception – fearless with no boundaries.

Fauvism – Fauvists were a group of Post-Impressionist Parisian painters who were shocking in their flamboyant and sensuous use of color.

Expressionism – Art in which the emotions of an artist are paramount over a rational and faithful-to-life rendering of subject matter, it is conveyed by distortion of color, surface and shapes.

THE QUEEN’S STATE FUNERAL WILL TAKE PLACE AT WESTMINSTER ABBEY

NEWS OF THE LONGEST-SERVING BRITISH MONARCH’S DEATH SENT SHOCKWAVES OF GRIEF ACROSS THE COUNTRY.

LONDON — No sooner had the long-anticipated news broken — Queen Elizabeth II was dead — than Britain activated Operation London Bridge, the painstakingly choreographed funeral plan that guides the country through the rituals of tribute and mourning that culminate with her burial 10 days later.

THE QUEEN OF ENGLAND, ELIZABETH ll

Countries throughout the Commonwealth – the association of 56 nations with ties to the former British empire – have been sharing their condolences and memories of Queen Elizabeth II.

From world leaders to members of the public, people reflected on Her Majesty’s legacy.

HER MAJESTY QUEEN ELIZABETH II was always present in our home.

“Our parents had all endured the Second World War in England and participated in helping however they could.  My Mother, helping build bombs at the factories and my Father – a Canadian soldier in Birmingham (where they met and married during the war). As a Canadian with British parents from London and Cornwall it was important for him and the young men of  Canada, especially those with a British background, to join the Army, Navy, etc. to assist in defending the Monarchy and the British Empire.

Paul’s Father was a political refugee in England as a result of the Spanish Civil War;  therefore he could not join the military due to his status as a political refugee.  Consequently,  he joined the home guard delivering bombs and amunition to the Defence Artillery during the war. Paul’s Mother, during the war, also worked to assist the war effort at Fawcett, Preston Engineering Co. where she met Paul’s Father, Pablo Francisco Ygartua and married soon after.

THE QUEEN – It was her dedication, her loyalty to her throne to the greatest living Empire that gained her respect worldwide.  Remembering back, the National Anthem “God Save the Queen” was at our schools, places of worship, on our TV at the end of the evening and if you were a War Bride from England, it would be your duty throughout the years to listen every Christmas/New Years – to the Queen’s message direct from Buckingham Palace–declaring their allegiance and respect, especially for the British who were destined for Canada after World War II .”

A Proclamation on the Death of Queen Elizabeth II

“In a world of constant change, she was a steadying presence and a source of comfort and pride for generations of Britons, including many who have never known their country without her. An enduring admiration for Queen Elizabeth II united people across the Commonwealth.”

OTTAWA, ON, Sept. 10, 2022 /CNW/ – The Prime Minister, Justin Trudeau, today issued the following statement on the proclamation of the accession of Canada’s new sovereign, His Majesty King Charles III:

“While we continue to mourn the loss of Canada’s longest-reigning sovereign, Her Majesty Queen Elizabeth II, we also look to the future with the proclamation of the accession of His Majesty King Charles III as Sovereign of Canada.

“Canada has enjoyed a long history and a close friendship with His Majesty King Charles III, who has visited our country many times over the years, most recently this spring to mark the Platinum Jubilee of Her Majesty Queen Elizabeth II.”Throughout his early naval career and later involvement with more than 400 organizations around the world, His Majesty King Charles III has demonstrated his dedication to service. We have no doubt that his deeply felt commitment to education, the environment, and the empowerment of young people will provide a strong foundation from which he will continue to work toward the betterment of the Commonwealth and its people.

“On behalf of the Government of Canada, we affirm our loyalty to Canada’s new King, His Majesty King Charles III, and offer him our full support.”

Queen Elizabeth II was the head of state of Canada, the United Kingdom and 13 other Commonwealth realms. She reigned from1952 to 2022, making her the longest reigning monarch in British and Commonwealth history. She was also the first monarch to be crowned Queen of Canada.

Most Canadians have never known a world in which Queen Elizabeth II wasn’t their official head of state.

The chairman of the Monarchist League of Canada says Canadians will process her loss at their own pace as commemorations are held across the Commonwealth in the coming days. 1982 Canada later became a fully independent country through the Constitution Act of 1982 proclaimed by Elizabeth II, the Queen of Canada.

Canada has been a monarchy for centuries – first under the kings of France in the sixteenth, seventeenth and eighteenth centuries, then under the British Crown in the eighteenth and nineteenth centuries, and now as a kingdom in her own right. These lands had been occupied for thousands of years by Aboriginal Peoples who, now for many centuries, have maintained an enduring and very close relationship with the people of the Sovereign and the Crown of Canada.

The territories which now form Canada came under British power at various times by settlement, war or cession.A large section of Eastern Canada (now Nova Scotia, New Brunswick and Prince Edward Island) was home to the Acadian People and ceded to Great Britain in 1713. Fifty year later, New France (Quebec) was also ceded by the Treaty of Paris.

September 15th 2022 – On September 19th, as Queen Elizabeth II is laid to rest, London will briefly become the center of the world. In a distant echo of Britain’s imperial standing of a century ago, heads of state from dozens of countries, including President Joe Biden, will witness funeral rites and flummery in Westminster Abbey, while perhaps a billion or more of their citizens watch at home. That is a function of Elizabeth’s longevity. Her 70 years on the throne began in the twilight of that now-vanished era and were packed with state visits and receptions. But it is also a measure of her success. As King Charles III begins his reign amid strife in Britain, populism in the West and a challenge to democratic systems led by China and Russia, this success bears examination.

On the face of it, the British monarchy runs against the spirit of the times. Deference is dead, but royalty is built on a pantomime of archaic honorifics and frock-coated footmen. In an age of meritocracy, monarchy is rooted in the unjustifiable privilege of birth. Populism means that elites are out, but the most conspicuous elite of all remains. Identity politics means that narratives are in, but the queen kept her feelings under her collection of unfashionable hats. By rights, support for the crown should have crumbled under Elizabeth, as The Economist has sometimes imagined it might. Instead, the monarchy thrived.