“AFTER LEONARDO DA VINCI” WAS PAINTED IN CANNES, FRANCE  1990

Ygartua painted the Mona Lisa a couple of times throughout his long artistic career but the painting of Mona Lisa that mostly stood out over the years was the 48x48IN (121x121CM) that he did in Cannes, France sometime in the early ’90s during our yearly sojourn while our children were attending the school in Cannes (which happened every other year for six years). The Mona Lisa here(photo above) is the one that was sold in France.  The 48×48 (121x121CM)painting of Mona Lisa–  in the end, was stolen. (see story below).

“At that time I was shipping my artworks back to Canada–Quebec City, Ottawa, Montreal, Vancouver and Vancouver Island. But I still went out on the Cannes promenade to paint and sell paintings to the array of tourists and locals who frequented Cannes. The locals did the daily ritual of the promenade walk, right in front of the glorious beaches of the Mediterranean or many came on weekends from other resort towns along the coast or the international business people attending the many seminars, wealthy people, regular folks –and of course, thousands came for the most famous International Festival, the Cannes Film Festival.  Cannes entertained everybody from every walk of life, and that is what made it so interesting, so inviting.

A few months before Tala was born in 1979,  we were living in Masnou, a short distance from Barcelona, where we were preparing for a One-Man exhibition at the Madei Gallery, Barcelona.  We had good friends there and one evening we were invited around for tapas and drinks. The Father of our friend, had a one-floor apartment, around Provenza and one night when we were invited around for drinks we saw the largest portrait ever, today, it is common, but that was the first time we saw a portrait in a home – 5 x 5ft.

The large portrait resonated with us, and when we got to Cannes a couple of months later, where the birth of our daughter took place on July 3, 1979; I thought about the large portrait and came up with the very first 4×4 Haida Chief.  But it wasn’t until a couple of years later upon our return to Cannes, that I thought of an idea to attract attention by having a 4×4 ft. Mona Lisa on the promenade.  Actually, I did get more attention from the Haida Chief, but of course, it was a novelty and I did get a lot of compliments therefore we decided that we better keep it for the FC. “   Paul Ygartua

“I believe the year was around the 1989/90 first school year for Tala and Anton in Cannes – we always put some special paintings aside for the FC and generally took them back at that time to Canada, now we often leave them in Paris in our locker there. At the end of the school year, we always headed to Sitges, where I sold my works with other artists on the promenade and then on to the Basque Country to visit our family and also do a solo exhibition at the Sala de Cultura in Gorliz and Plentzia. Then we would head back to our family in England and generally leave from London.  But this year we left from Amsterdam as I had a free flight Vancouver/Amsterdam return for the family plus money for the commission that Canadian Airlines hired me for –The Pacific Family.”

Upon our return back to Canada, of course, we had many suitcases, as due to the free trip we were also allowed extra baggage with no charge; so lumbered with all these cases and one black tube with six paintings– Chief Dan George, a very special one, a more modern cubist and Harley Davidson (2), a couple of others and the 48×48(121X121CM) of the MONA LISA.  Well, first of all, it was our fault, the tube was black, the trunk of the taxi was black and believe it or not we left it behind and it wasn’t until we were checking all our bags that we realized that we must have left it in the cab.  We called and they said yes, it is here, but they never returned the tube and back in Canada the next day I called and they said they didn’t know what we were talking about. So the Mona Lisa (the 48x48one is somewhere in Amsterdam).

Well, this did happen again, another school year in Cannes, going back to England for Christmas, and stopping off in Paris for a few days.  Always chaotic at the Paris airport, rushing around and cabbies saying I am cheaper, come with me, and Ygartua running around saying hurry and so we left that tube of paintings –Harleys mainly – right there, on the curb where you pick up your cabs.  Francoise called for several days, to no avail.  Years later somebody did call saying they found some paintings, that is another story, although we never got those back either. 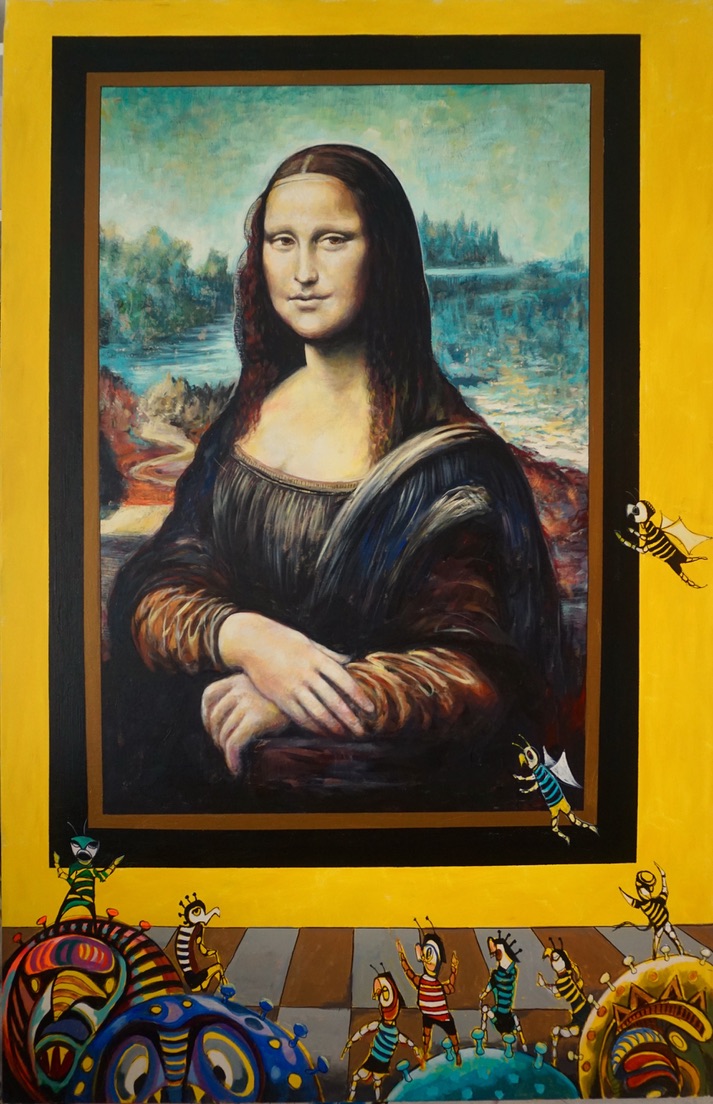 The original oil painting of the Mona Lisa (77x53cm) was painted by Leonardo da Vinci in 1503 and has been on permanent exhibition at the Louvre Museum, Paris (since 1797). The Mona Lisa is a half-length portrait painting by the Italian the most visited, the most written about, the most sung about, the most parodied work of art in the world.” Wikipedia

“Art nourishes the soul–I feel connected when I am creating, it is my life force, it is my joie de vivre, every hour, every day–to (access) tap into the subconscious and bring surreal worlds to life.”

I have always been fascinated with the history of the Mona Lisa and the conspiracy theories going along with it; the mystery of her smile embodies a deeper meaning and expression. It has always been a challenge to capture the facial expression that dominates her persona. I have painted the Mona Lisa once before when living in Cannes, S. France–it was acrylic on canvas, 4x4ft. It ended up stolen in Amsterdam sometime in the ’90s. So, I was motivated to paint it again, looking for subject matter for my COVID-19 Series THE MUSEUM SPECTATORS–introducing my Coronavirus and assistants, like the shark and its pilot fish.”

While living, painting and exhibiting with galleries in Paris and participating in many international Paris-based shows, (including the Carousel at the Louvre) I had the opportunity to take advantage of the museums and over the years I did visit Mona Lisa a few times. It is always exciting, inspiring and fulfilling. It is an experience that is hard to describe, there is so much there. The concentration of architecture, culture, cafes, food, wine, art, and rich history are all in one city and the home of the world’s most visited galleries and monuments.

A legendary capital of the arts, Paris hosted some of the most celebrated developments in world culture–particularly at the beginning of the twentieth century, with the flowering of fauvism, cubism, dadaism, and surrealism.