The Power of Creation–the challenge is to influence your viewer–to enable others to experience the same emotions, the same high the artist experiences through the energy expressed at the moment of creation.

Being on the edge–Originality, spontaneity, freedom of expression. I like to approach the wall as if it were a large canvas—it is more interesting and more original to not use a projected image, more of a fascination, more of a challenge—who wants it to be easy –  I want to experience the energy, the high of the challenge, your brain has to be alert, concentration is at a peak at all times, you feel connected. I find this to be thrilling, exciting and more original and the end result is much more satisfying.

MURALS –create a completely different challenge and a real physical workout. Working on large canvases or a large wall gives a much more vast appearance of space to expand a visual impact from many yards away, allowing viewing from a distance and visualizing a finished product.

Every artist aspires to painting majestic canvases and no better is that achieved than painting wall murals. Most of the walls I have painted range in size from 30 x 50 to 25 x 300 feet. The challenge is creating the composition in the right proportions at such a large scale.

This is approached with a vision of the wall finished before you start. You need to see it in your mind’s eye just to get the perspective, balance and correct proportions. You must always take on the opportunity of working without a projector, in this manner the freedom of the hand will often bring that third dimension that you have always been trying to achieve. It is only then when you will actually envision the subject matter on the wall. 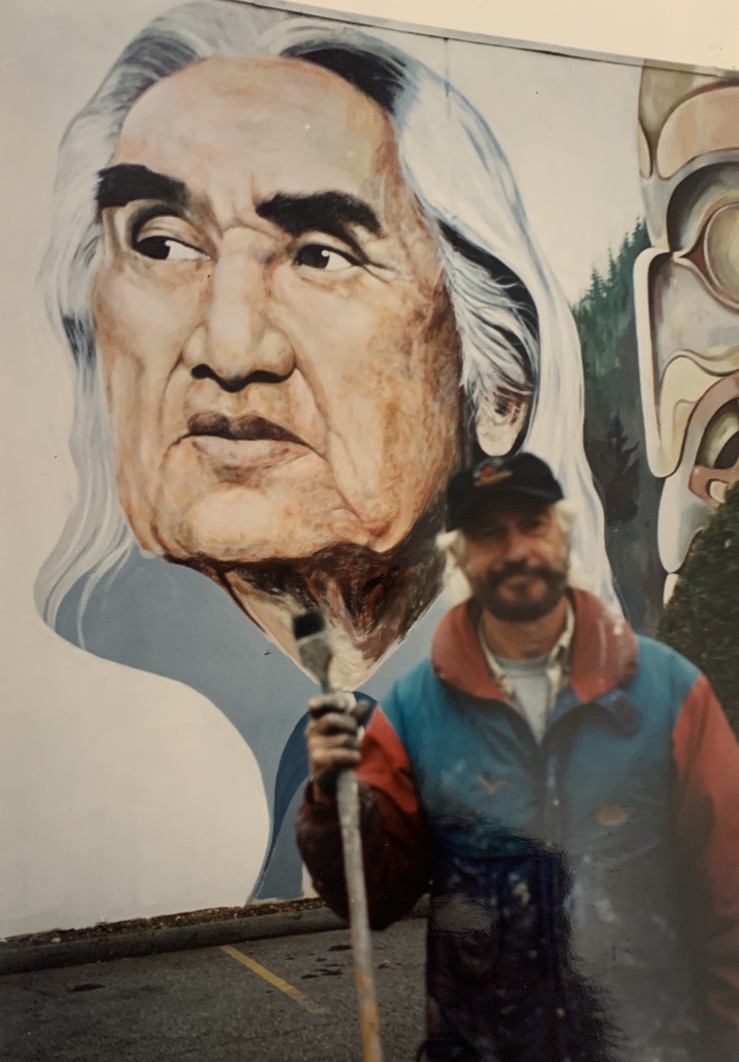 CHIEF DAN GEORGE and YGARTUA with his one brush

BEACHCOMBER SALUTES TO THE ICONS & THE RECORD BREAKERS OF THE MILLENIUM

“I even have a photograph of me holding the brush at the end,” the muralist added. “We even thought of going to the paint company, showing them the brush saying, ‘This would be great advertising for you.’”

Full of famous faces, the giant mural can’t be missed on the corner of 132 Street and Comber Way. School kids and business groups come to view it on tours, and others just stand in awe.

“(The) painting is here for all to admire and enjoy,” business owner Keith Scott has said, “but most of all, to be inspired and challenged by the accomplishments and dreams of these famous faces. We can all learn from their achievements, and from their mistakes.”

Scott commissioned the colorful mural in 2000 as a millennium project saluting a constellation of “legends” including Princess Diana, Walt Disney, Martin Luther King Jr., Terry Fox, Billie Jean King and other trailblazers of the world.

Ygartua worked several months to complete the mural, at the time considered the world’s largest painted freehand by one person, on a “canvas” measuring 390 feet by 24.

“I spent the first month or so, a few weeks, just drawing it,” recalled the Vancouver-based artist in a phone call. “I didn’t put any color in until a couple of months later, simply because I had to go to Europe for an exhibition. We had to leave, so when we came back I started painting them. The first face that was finished was Chief Dan George, and then I worked along the wall that way, you know.” 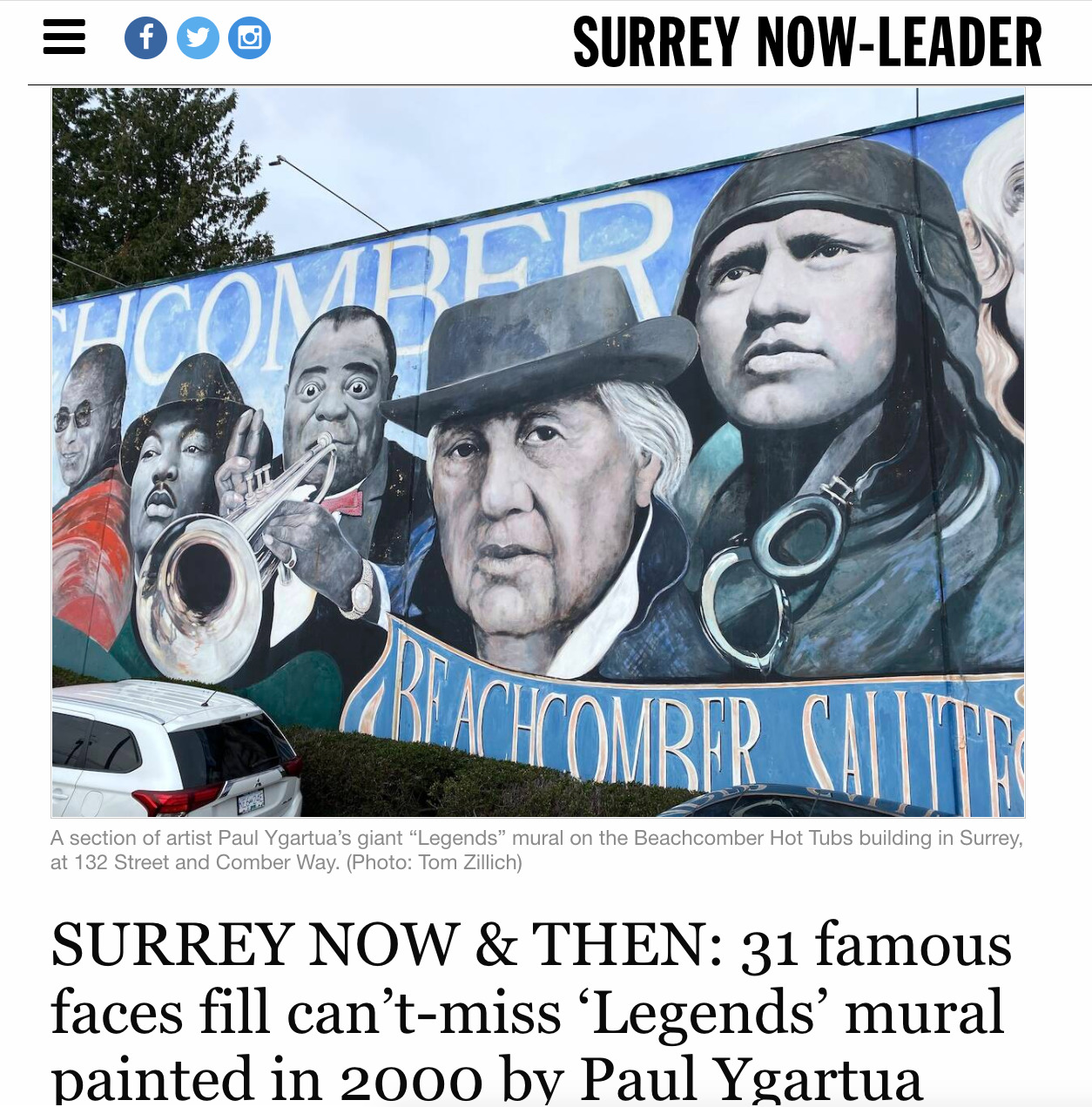 “Beachcomber Salute to the Record Breakers” – Surrey, BC

Beachcomber’s Factory Facility wall features a one of a kind, custom painting, called “Beachcomber Salutes the Legends of the Millennium”.

This is the largest mural of its kind in the world. Commissioned by Keith and Judy Scott for the new millennium in the year 2000, it was subsequently repainted exactly for a second time, in the summer of 2012.

The artist, Paul Ygartua, is a master in portraiture with work featured around the world. You can see his history, accolades, gallery and many projects at: www.ygartua.com Paul is one of the premier portrait artists in the world today, with an amazing gift to work on images at many times actual life size. These faces are over 10 feet / 305 cm high! This is one of the world’s largest paintings of its kind, at some 300 feet / 9140 cm long and 25 feet / 762 cm high, featured in two segments.

The south-facing wall is called “Beachcomber Salutes the Legends of the Millennium”, a collection of faces that have changed the course of history in the last 100 years. These are famous people, dreamers who accomplished much, from Chief Dan George to John F Kennedy, to Terry Fox. The west facing wall features a “Salute to the Record Breakers”, showing famous faces of personalities that have changed their sport through great achievements, from Pele, to Rocket Richard to Wayne Gretzky.

The mural was the brainchild of Beachcomber owners Keith and Judy Scott, back in 1999. As the company launched globally, Keith and Judy wanted to do something special to share with the Beachcomber organization, and the community at large as the millennium approached. After the painting was complete, a community party was held on site to celebrate worldwide expansion with this mural as evidence of this special launch.