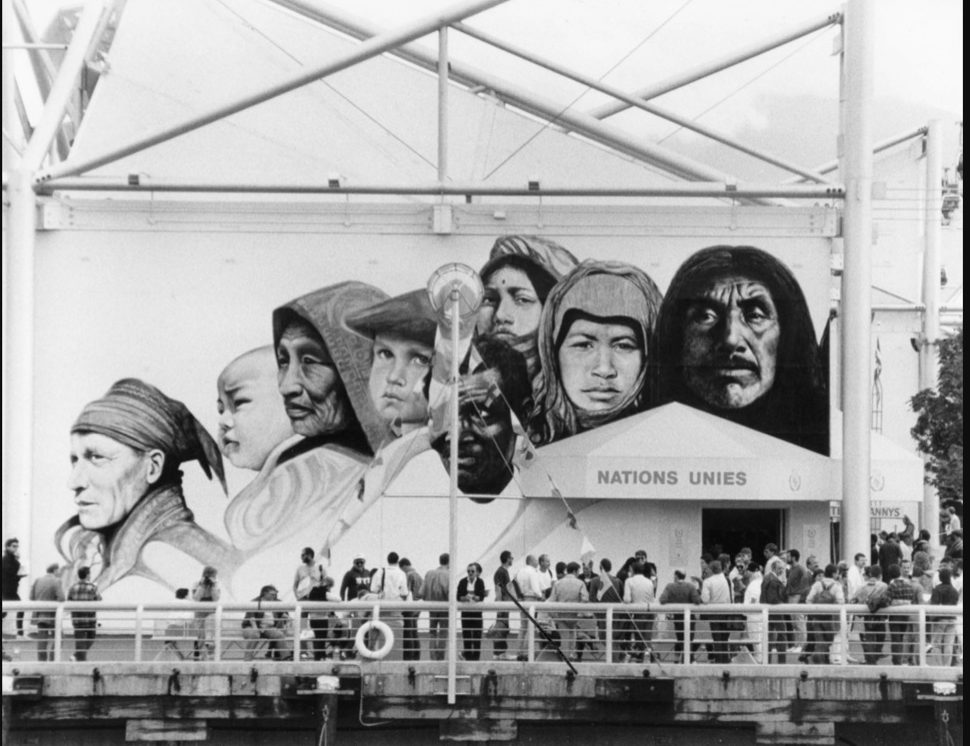 In 1986, Paul Ygartua painted the “World United”, UN Pavilion Mural at the 1986 Expo in Vancouver. It was the International Year of Peace and the United Nations theme was world harmony.  It was 9.14 by 30.4 meters (30x100ft) and represented 16 portraits from the 5 races.  – Tala Maillot Ygartua  YGARTUA ART CHRONICLES

HIS MONUMENTAL MURALS HAVE CAPTURED ATTENTION WORLDWIDE PORTRAYING AN INTEGRATED MOSAIC OF THE PEOPLE OF THE WORLD. THE WORLD IS HIS PALETTE AND ONE FEELS THEY ARE TRAVELING ALONGSIDE – AN EXCITING JOURNEY THAT TAKES YOU TO THE INNER DEPTH OF HIS SOUL

The sheer volume, the immensity of this undertaking  took a great deal of  time and research –  starting a couple of years before the commencement of EXPO86, even before THE UN PROJECT.

The by chance meeting of David Cadman in Stanley Park –  a previous client that adored Paul’s Native renderings of the Native People of Canada – who stopped that one Sunday , to look at Paul’s work  while exhibiting in the park  – and only due to our previous efforts trying to get into Expo 86 , one way or another; was the reason that Paul started relaying his incessant endeavor to be part of Expo.  And low and behold David Cadman, listened and then said to Paul “This is your lucky day Paul Ygartua, I am the President of the UNITED NATIONS here in Vancouver and how about coming down to the site Monday morning as I think you are the guy we are looking for. (this was in February 1986).  And there we are – on the Monday morning Paul was presented to all the executives and they said here is the building what can you do for us.– and this is how it all began.

We always say everything is timing, you got to be at the right place at the right time – and so this was always our motto – You have to be everywhere all the time – you just have to be out there – and I guess you could say it was our lifestyle – you gotta love it or you couldn’t do it – an endless desire to keep on that same pathway – only looking forward, never looking back – your willpower and determination is always the most important factor to achieving anything – it enables you to continue if you are lucky –this wondrous adventure –thrilling and exciting.

The project was confirmed and the idea was presented to the UNITED NATIONS at THE VANCOUVER, EXPO 86 SITE.  It fitted in perfectly with the theme of the UN – (Paul was already renown for his celebrated mural in Chemainus of the Natives) as the theme for Expo 86 was the International Year of Peace and the UN theme was World Harmony.

So, when we presented them with the large mock-up –triptych – $10,000.00 – the bank bought the mock-up that day and then the idea of reproductions, posters and postcards were part of our presentation – which then would also involve UNICEF, who was in charge of the site of for the United Nations.–and that was the beginning of a six month non-stop workload, from delivering, using couriers for most deliveries, to get to the site with the posters, etc. and the limited editions that ended up in all the Credit Unions across BC.

A World United was everywhere, the posters, and postcards flooded Vancouver and the demand was insatiable and the publicity, interviews, etc. were interminable.  The endless special events whereby the Limited Edition of The World United was be gifted to many dignitaries including the President of the UN from New York, (photo below –hand-signed,  limited to 800 ) and to all the officials,  diplomats, the executives, actors like  Danny Kaye, personalities who were involved with the Children of the World Project.

And the most rewarding part of all of this was the extraordinary experience of working directly with the Credit Union, the UNICEF & the UN staff – all on a daily level – an invaluable life-learning experience. 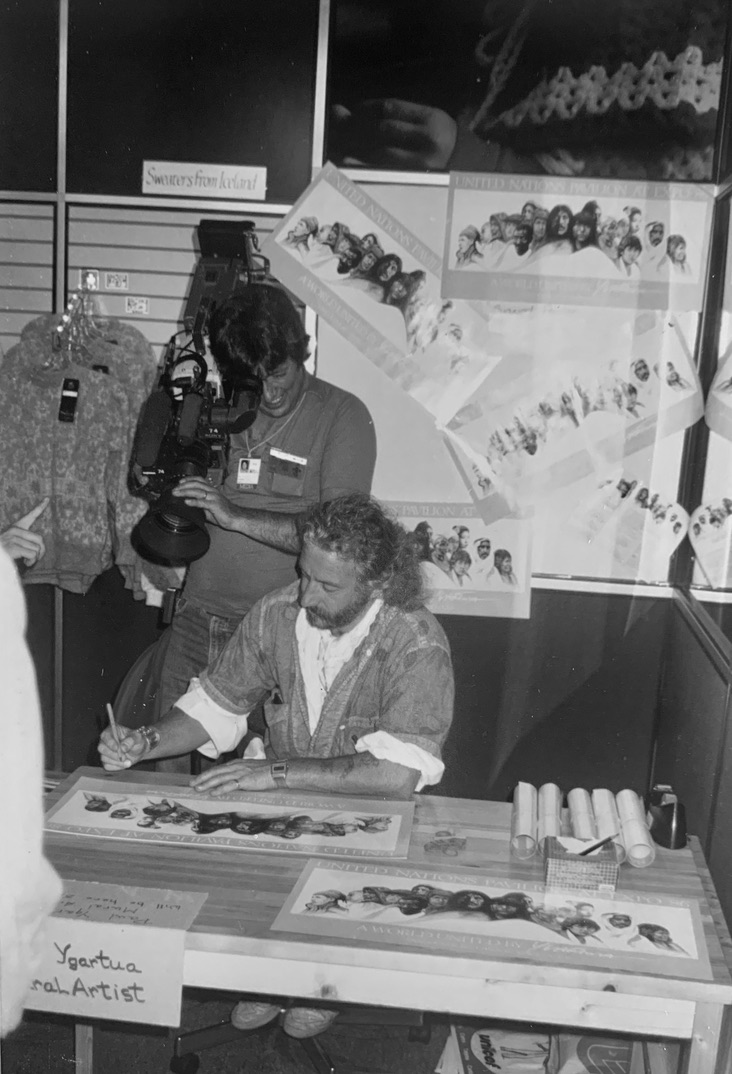 YGARTUA ON LOCATION HAND SIGNING THE POSTERS “A WORLD UNITED” 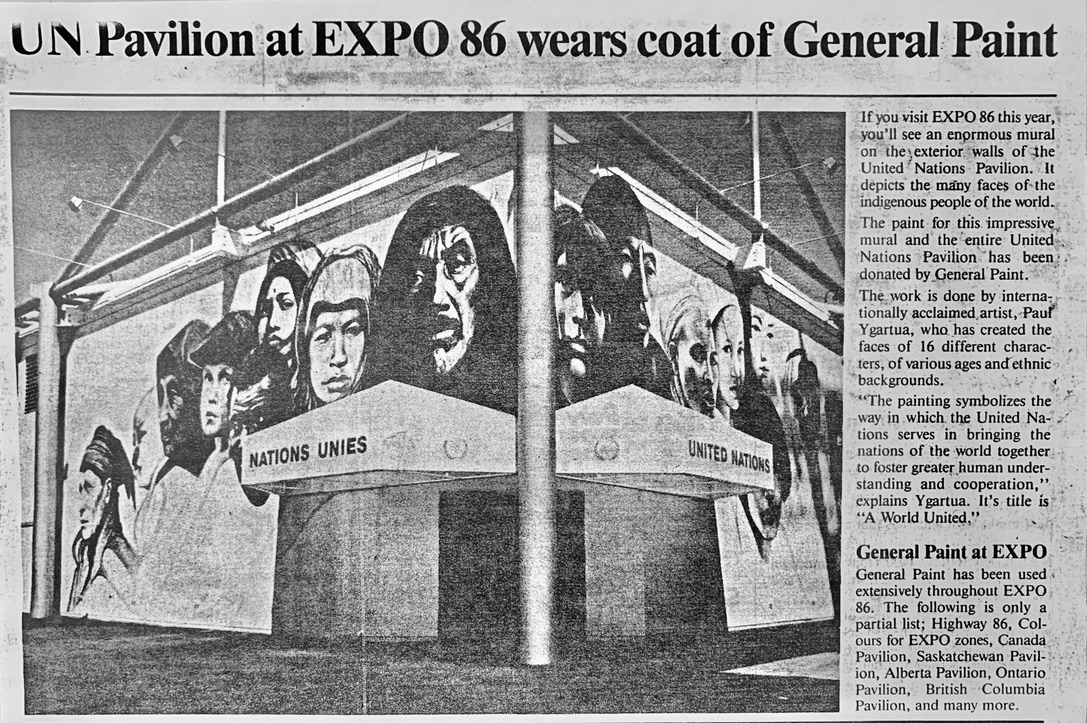 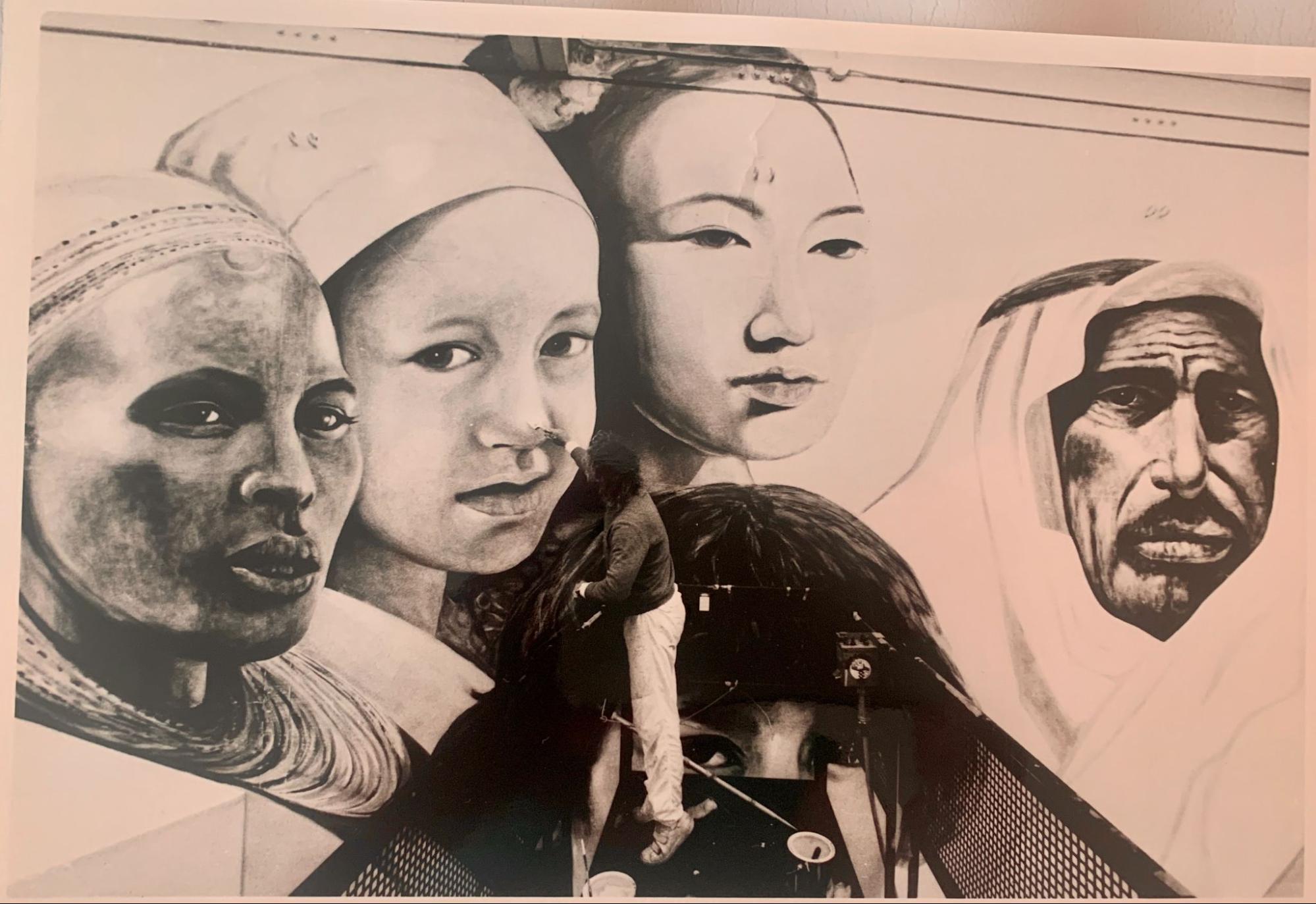 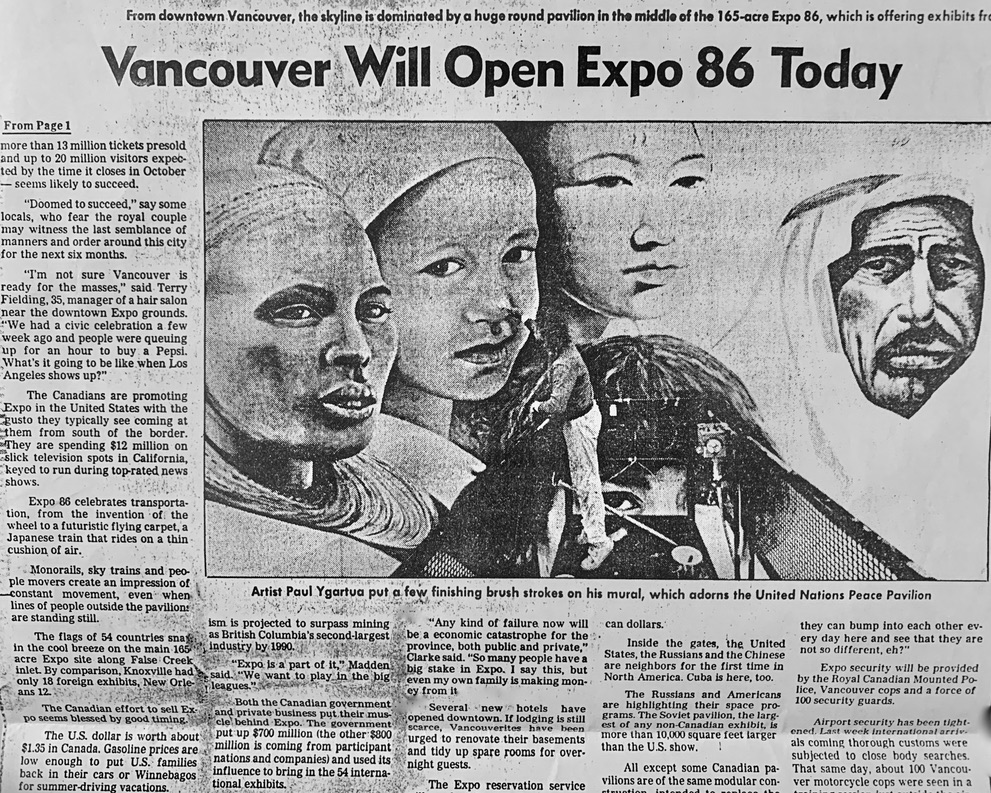 ALL FIVE RACES WERE REPRESENTED – OUR CHILDREN TALA NICOLE & ANTON FRANCISCO YGARTUA  REPRESENTED THE WHITE RACE in their Basque outfits – the oldest ethnic  group in Europe.  PAUL IS ABOVE DOING FINAL TOUCHES TO TALA NICOLE (our daughter) wearing the Basque headscarf that she wore at the Basque Fiestas during 1985 (the year we resided in the Basque Country). Anton and Tala went to pre-school during the week  and on the weekend  took the Basque Dancing. The summer of 1985 they participated in the local Fiestas as part of the Gorliz Basque Dance Group.

Anton is represented on the other side of the mural wearing the Basque Beret, next to the Black Man – Portrait from New Orleans. 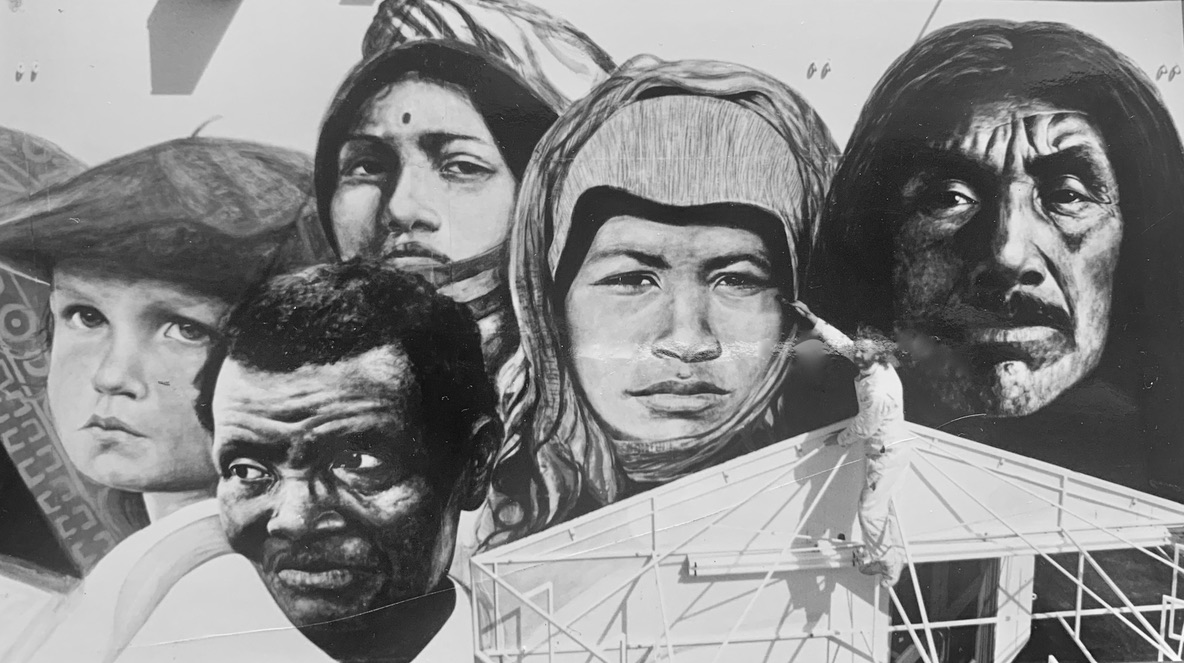 The City of  Vancouver and  its citizens welcomed visitors from all over the world – and we all did a great job – it all worked out, even the weather was on our side.

We had already planned to leave two weeks after Expo 86 – the end of October, to cross Canada in our big van, our four day trip –  for the next adventure – Quebec City. Tala and Anton, still young, just returning from the Basque Country in September, 85 with one year there at the Guarderia, used to listening and learning other languages, including their daycare in Rio in 84.  So it was time to seek out new galleries on the east coast of Canada, the New York Expo 87 (which we had already applied to and accepted) and an opportunity for Tala and Anton to be in our french speaking part of Canada for one year.

Before we left for Quebec, and the last two months before the end of Expo, we got many calls regarding the mural – WHERE WOULD IT GO AFTER EXPO.  There were calls from local businesses, local brewery, the Peace  Arch at the border,  a couple of religious groups all wanting to know what would it take to either purchase the mural or have it moved to their location as they thought it would be amazing publicity for either their cause or their business and of course for us it would be very important to have one of the most famous murals of Expo 86 to continue with its publicity for Ygartua and also as an attraction for the community of Vancouver or wherever it may go.

Expo did own this mural, so we referred everybody to the officials at Expo site , the people who made the decisions – we were not able to be instrumental in the process of finding a future location for A WORLD UNITED–we were delighted with all the attention it was getting and hoped that it would end up somewhere in Vancouver.

We arrived in Quebec City on November 4th and we registered Anton and Tala in the local catholic, french school, close to the Frontenac, where we found an apartment, the renovated old newspaper building – it was great.

Then we get a call from my Father in Vancouver informing us that there was a newspaper article in the Courier newspaper with our Economic Development Minister, Grace McCarthy, on the elevated platform right in front of the big Haida Chief, see below. 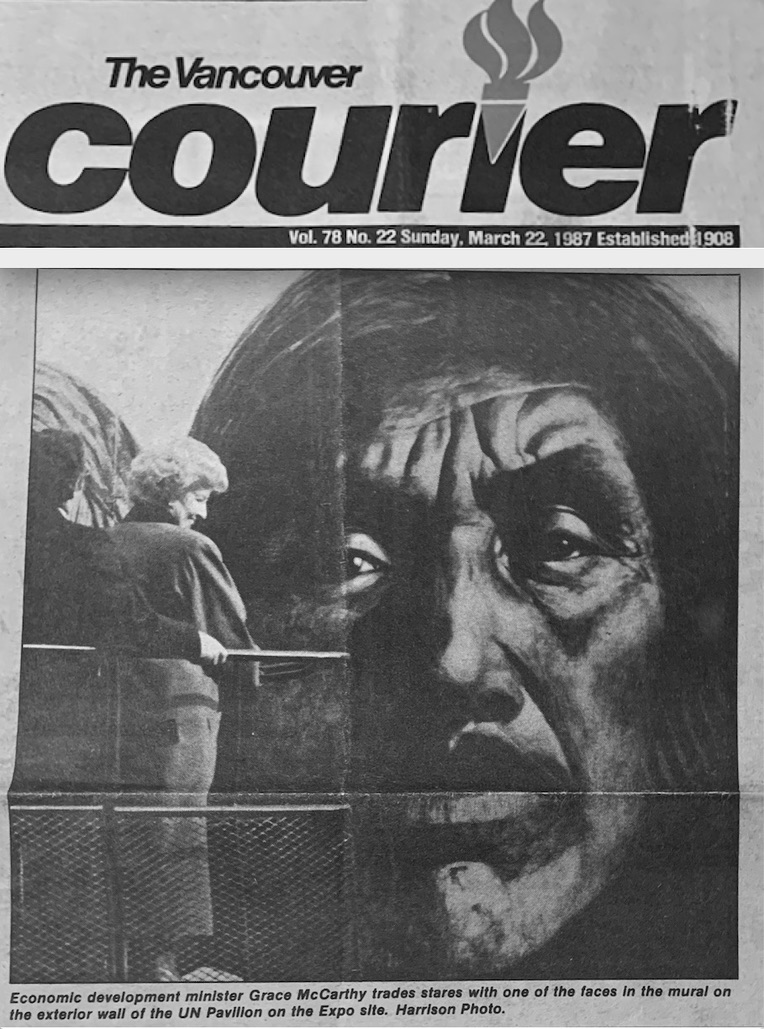 And as the story goes, the Government of BC finally decided to gift the mural to Juan Hurtado Gallardo, the President of Granada (at the time) and it would act as Canada House at their Seville Expo 92 (Spain).  We couldn’t be happier as this would mean that we could come out with another set of reproductions, etc. as we held all the rights and Tala and Anton, represented the white race, with the Basque outfits on – the oldest ethnic group of Europe. – (see letter below from El Presidente Gallardo and my handwritten letter to him. We discussed with El Presidente that just before the Seville Expo Paul would have to touch up this mural once again.) 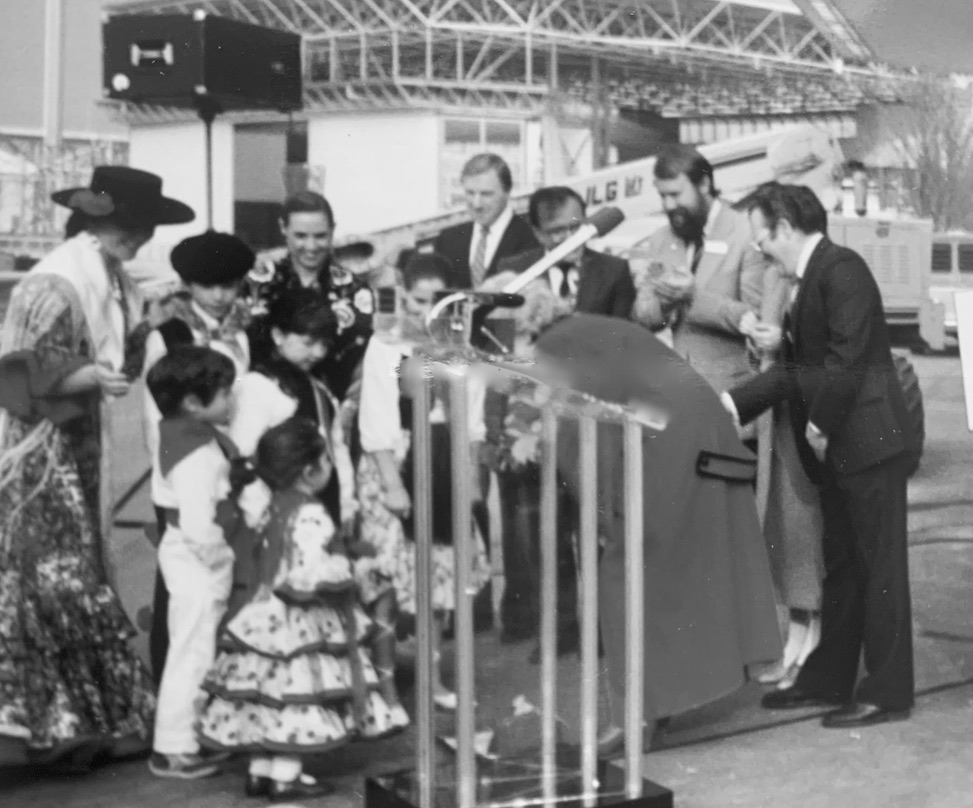 Grace McCarthy, Economic Development Minister  &  Juan Hurtado Gallardo, the President of Granada were greeted by the Spanish Club here in Vancouver Expo 86 at the handover ceremony – A GIFT FROM THE B.C. GOVERNMENT TO SEVILLE – FOR THE NEXT EXPO SEVILLE 92 – this building would be erected for a second time and act as Canada House.

THIS WAS A GIFT – the opportunity for Ygartua to be presented at the Seville Expo 92.  Then, unfortunately, we got word that El Presidente Gallardo did not win the election and therefore the new President was never approached as it is always understood that they have their own agenda and are not interested in any previous arrangements from a former President. 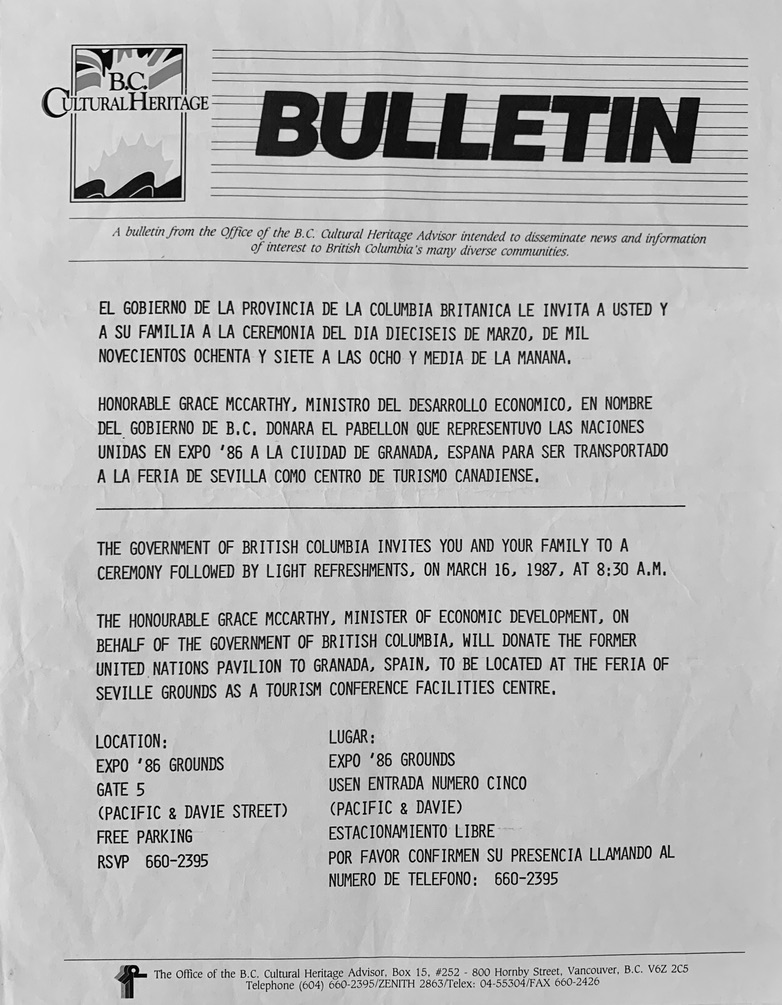 Letter from the President of Granada, Juan Hurtado Gallardo June 4, 1987

Letter from the President of Granada, Juan Hurtado Gallardo June 4, 1987 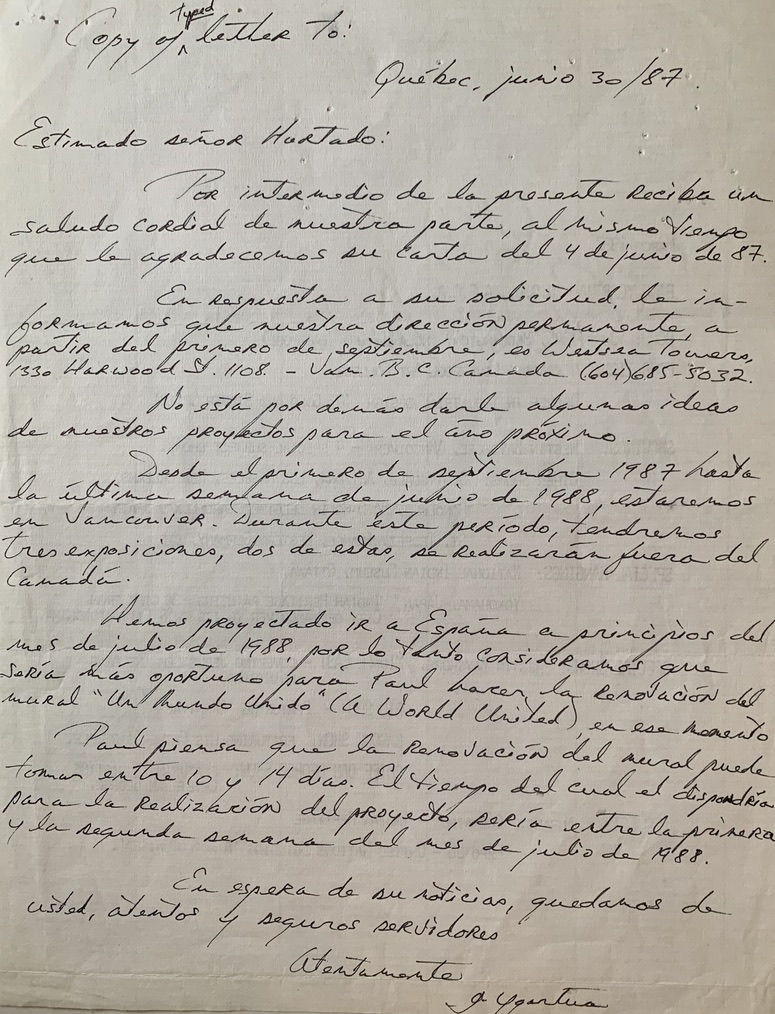 AND SINCE THAT DATE YEARS BACK, WE DID CONTINUE  SEARCHING FOR A WHILE – TO NO AVAIL – WE HAD HEARD THAT SOMEBODY SAW IT IN STORAGE AT THE SUGAR REFINERY IN VANCOUVER OR THE ISLAND? BUT COULD NEVER FIND THE RIGHT CONTACT – LOST FOREVER. And what a shame as there were many people who would have had the perfect location for A WORLD UNITED for all to enjoy.

There were many official letters congratulating and praising  YGARTUA for his Masterpiece Mural –   A World United – here is a brief introduction to the correspondence that took place during Expo 86 and after with the dismantling of the mural. 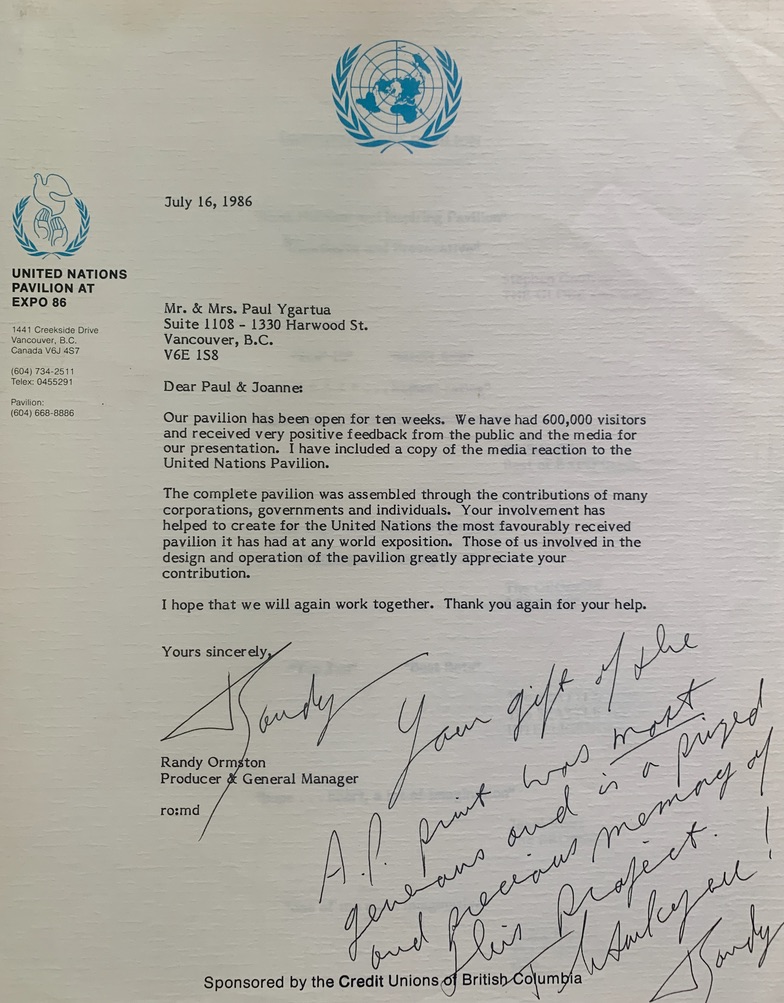 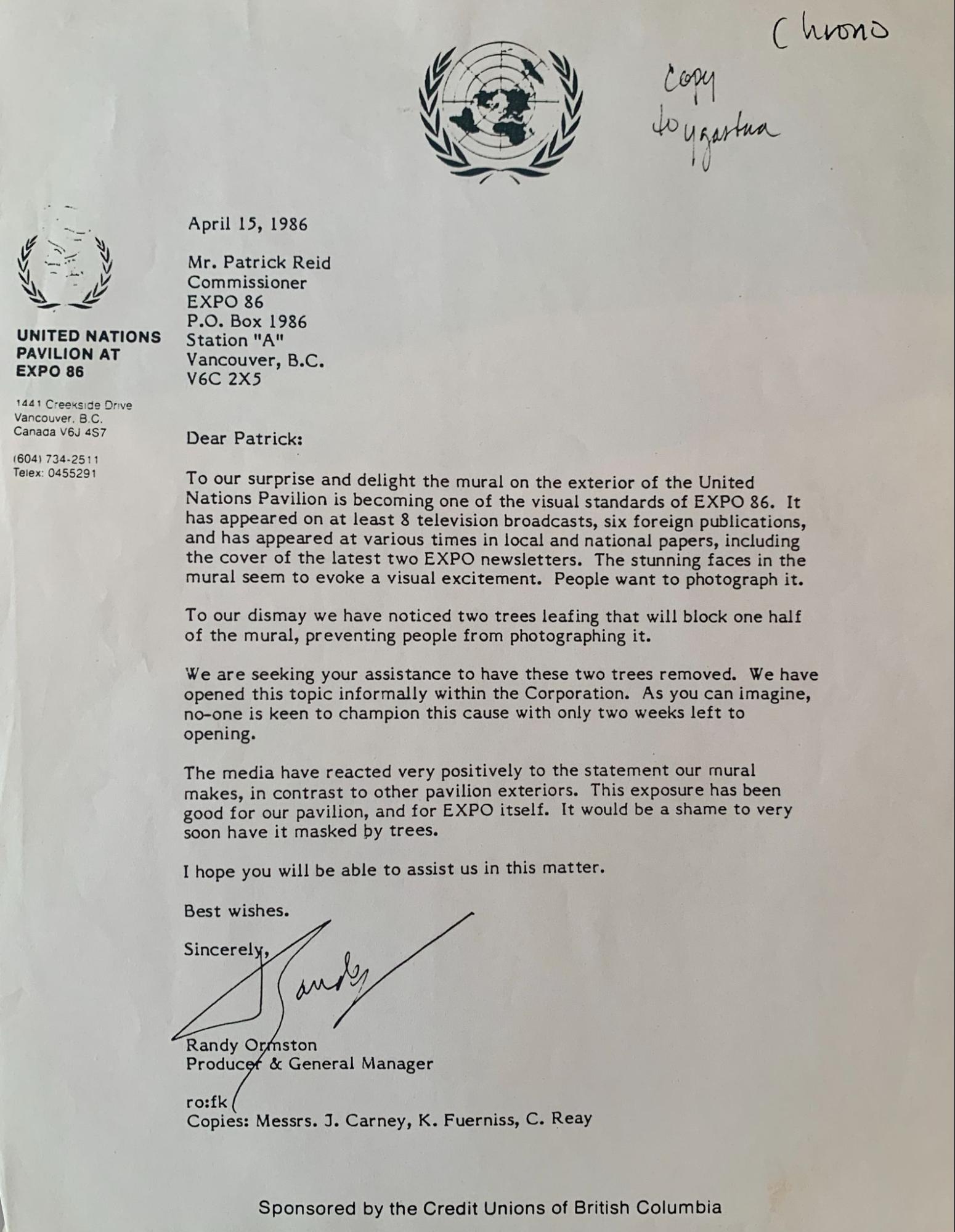 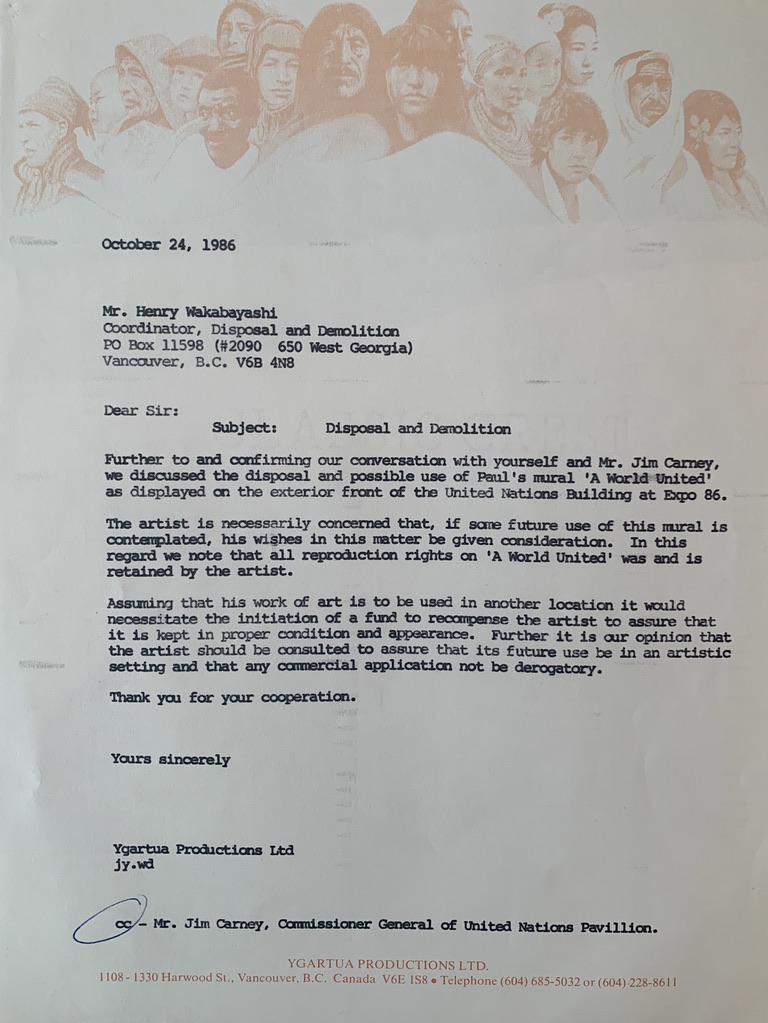 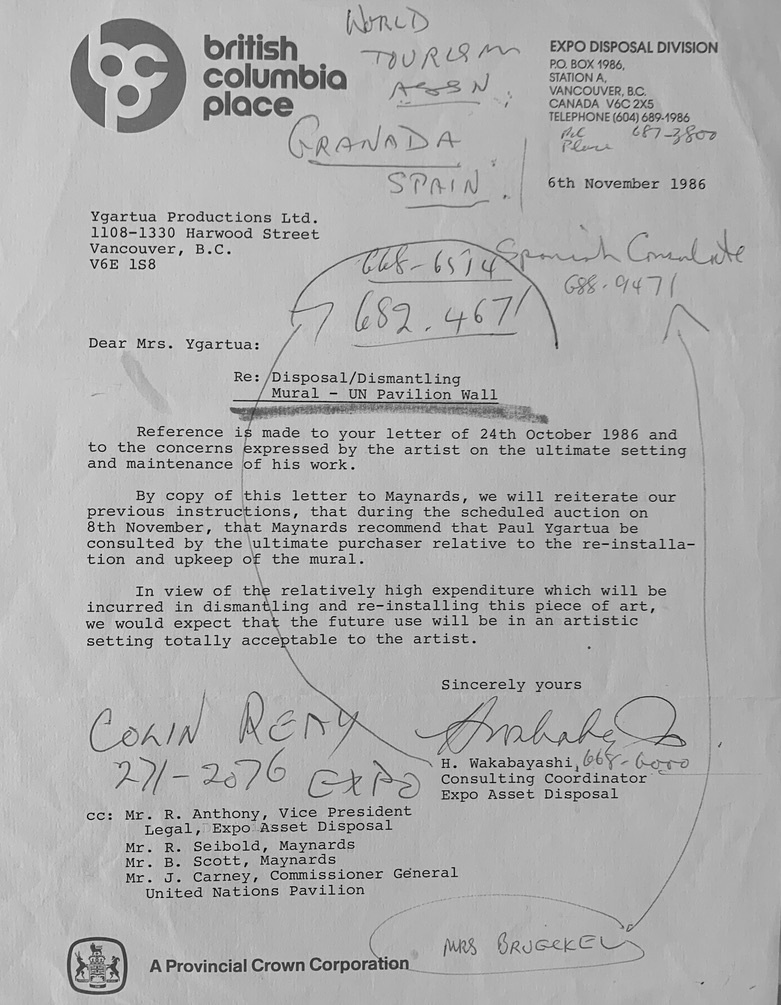 IF ANYBODY HAS EVER SEEN THIS MURAL, COVERED UP IN SOME WAREHOUSE PLEASE CONTACT US