THE CIRCLE OF LIFE 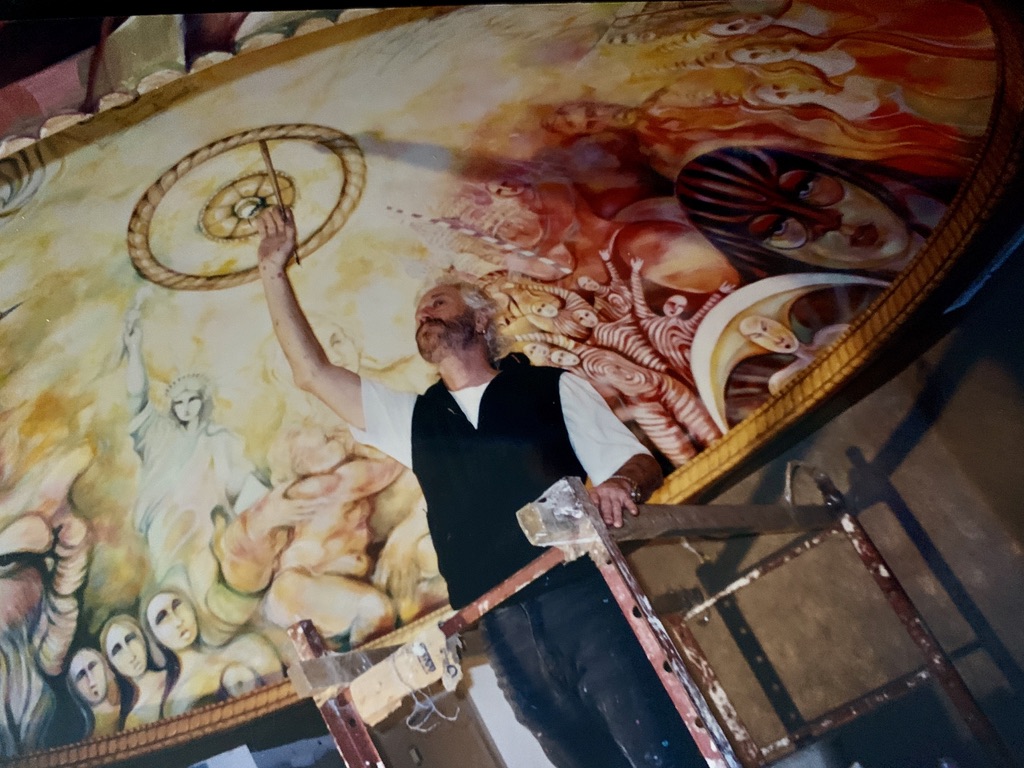 Keith Scott and Judy Scott (the owners of Beachcomber International) were both art aficionados — they not only supported our local native talent but they were also inspired by the world’s famous architects, sculptors and artists.

Keith Scott was a great admirer of Marc Chagall’s notorious fresco painting at the Paris Opera House.  We ourselves, with Tala and Anton visited this masterpiece of Marc Chagall sometime in the 80’s — after the tour we had an early dinner at the Iconic Parisian — Cafe de La Paix — an opulent 1800’s institution with views of  the Opera House of Paris — a meeting place for the celebrities, and the writers of its time — Guy de Maupassant, Oscar Wilde, etc.

The Scotts also visited Chagall’s ceiling fresco and this was the inspiration behind the Beachcomber’s Board Room’s domed ceiling — this room was designed by their architects who were brought in to create a domed ceiling for Paul.

Upon entering the room one did sense this transcendental experience confronting  another era — that later would be adorned with heavy dark maroon velvet curtains — a grand entrance to another period in time– quite fitting as it was the entrance to Paul’s fresco ceiling THE CIRCLE OF LIFE .

I have always been amazed how Ygartua looks at any new project, as he says he can already see it, so when Keith is describing Chagall’s ceiling, that was very fanciful, along with biblical subjects, buildings, dancers, angels, in his playful style, loose and free — Paul already had a vision of what his fesco would look like.  He did an hour-long sketch for this in black and white with a light ochre wash which we did keep. Keith did ask to buy it, but the sketches are important for the FC — from an historical point of view.

Keith had mentioned all the subject matter, from the world renown buildings–Sacre Coeur, Big Ben, Lincoln,  Arc de Triomphe, etc.  to the biblical studies, the Sistine Chapel, the famous sculpture, Madonna, Trevi Fountain,the Cirque Soleil, Court Jesters, the Statue of liberty the Carnival (and if you really do a search you will find the totem from the Chemainus mural with Mrs. Rice at the top). He also wanted his wife and himself with masks — a wonderful fascinating theme — once again the celebration of Mankind over the last 100 years.

The architects had done a plaster form which was circular for the domed ceiling idea, the edges were white, a continuation of the plaster form. Paul decided that similar to Chagall’s Opera House domed ceiling  painting where there was a circular wood edging done in gilt gold that he also wanted to do a sculptured gold edging which really finishes off a work of art like this — the effect was stunning and so important for the final finishing of his Masterpiece “ Circle of Life.”

It was astounding, if you looked closely it really looked so perfect that you think that this is really an antique gilt wood frame. It looked like wood, it was flawless, exquisite and one wonders how can you do this to perfection in just one day.  I always say how is this achievable, thinking that his silversmithing — in gold and silver and design work must have made a difference, yet he always claims it was easy, “I just do it.”  Yes, if you have a gift, then it all seems possible.

THE BEACHCOMBER INTERNATIONAL BOARD ROOM, CANADA

“When Keith Scott approached me on the idea of constructing a domed ceiling for me — to create the Circle of LIfe for his new Boardroom — I was elated. as this would be an opportunity to do my first FRESCO.

I had done many large murals but a domed ceiling is a whole different challenge. I had to rethink how to approach this fascinating project. The ceiling was around 12FT(Height 144IN/365CM ) in height and around 16FT( 192IN/487CM) in diameter)in diameter. So the architects had to build a scaffolding for me to enable me to reach the pinnacle of the domed ceiling. I had to paint this standing on a platform–it is very physical and a real good workout.”

It is only when you start to think about it, like how do you get there, how do you figure out the perspective and how do you make sure that the images are not distorted. When I asked Paul, he said without hesitation: “Sure, just like Michelangelo I will have to stand up on the scaffolding — you have to look up, then upside down just to figure it out — making sure that the subject matter is balanced around the pinnacle of the ceiling so it flows in a continual movement.

First, you must work from the bottom lower part of the dome , working upwards slowly, so that the design continues to have a circular movement. This part is easy as you are looking straight at it, and then the hardest part is the actual highest point, because you are basically upside down.  So it is complicated when you get to the top because you could get a distortion of the subject matter.  The perspective you must figure out  when upside down, looking at the highest point in the center of the ceiling —  then you have to think of the perspective looking into the distance, and you have to make your proportions different from just a flat surface.

So, with this experience it actually gave me some foresight to what I must envision to see the total image before me and then it just clicks, I see it, and it happens.

Once I had finished the domed ceiling, I lay on my back on the floor below looking straight up at the centre to visually experience the finished painting. At that point I could check the balance, the perspective and the flow.”

Paul never complained about neck aches, or back aches. I believe when he is working he is so transfixed with his creation that nothing interferes — extraordinary concentration and completely absorbed and immersed in executing his fresco “The Circle of Life.” 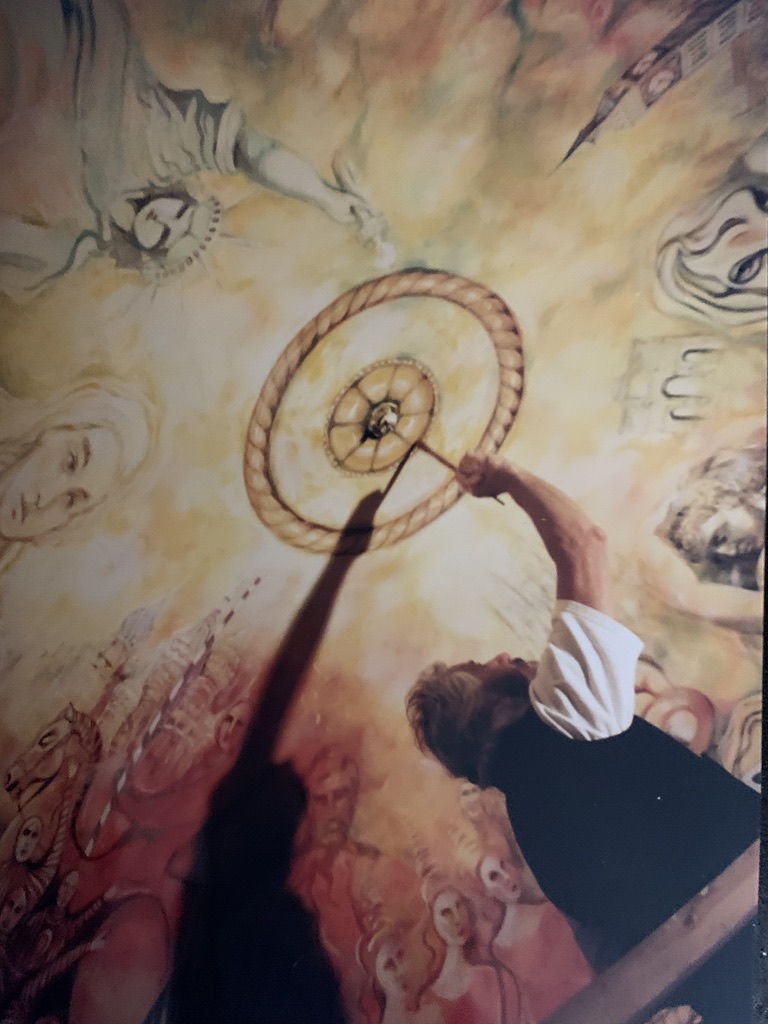 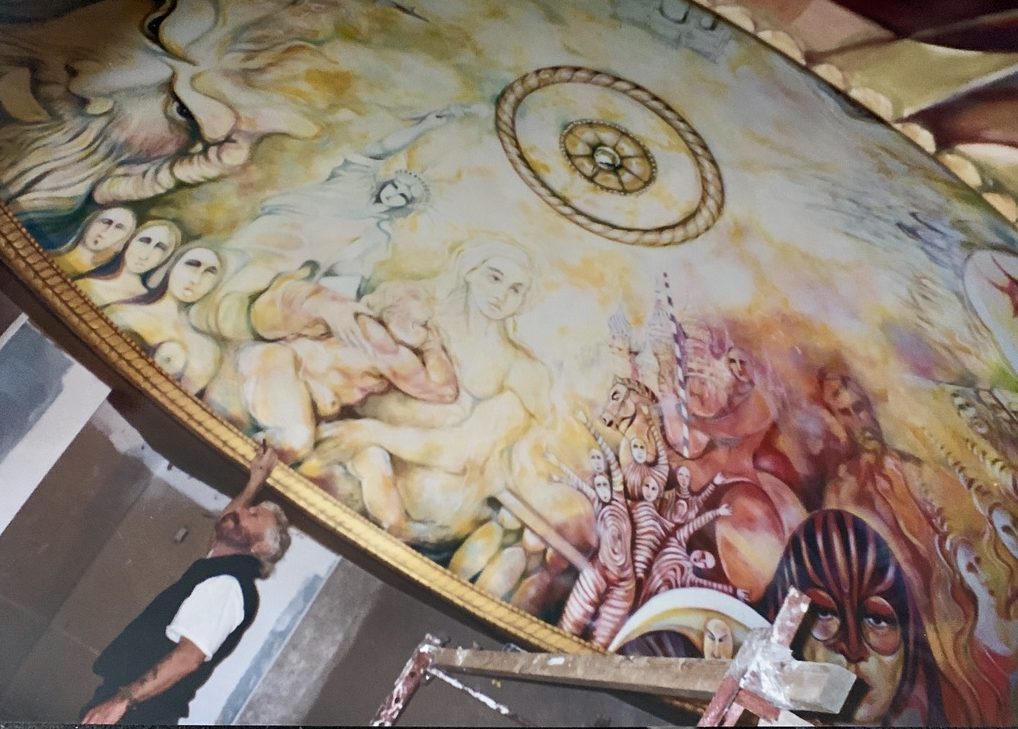 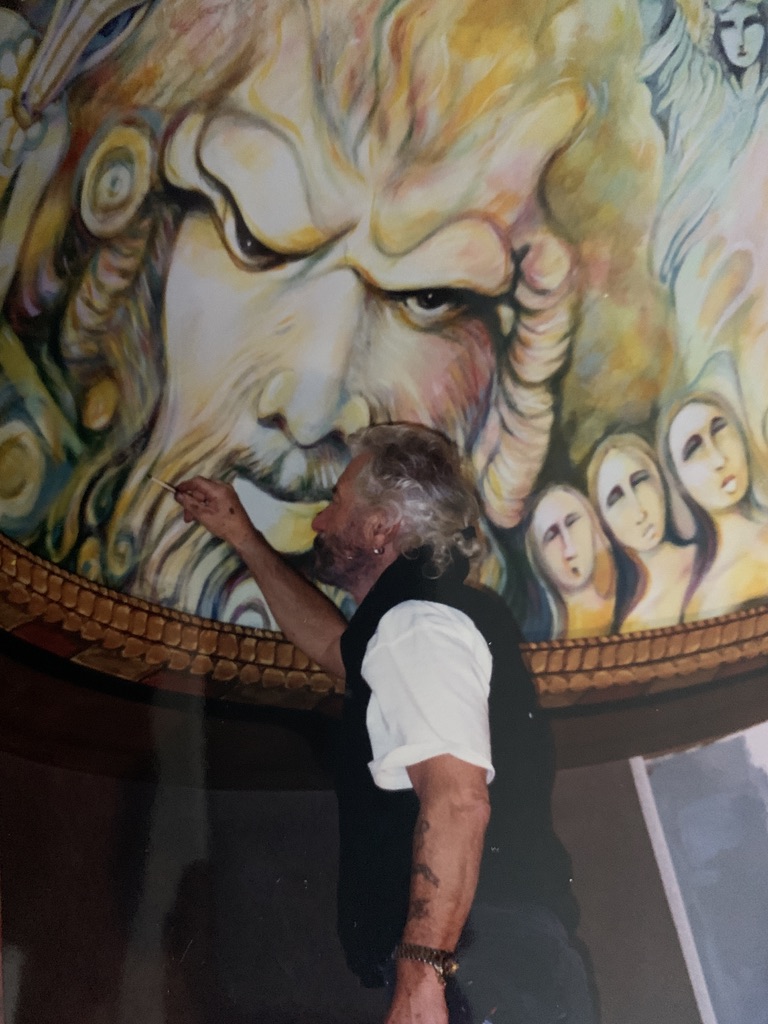 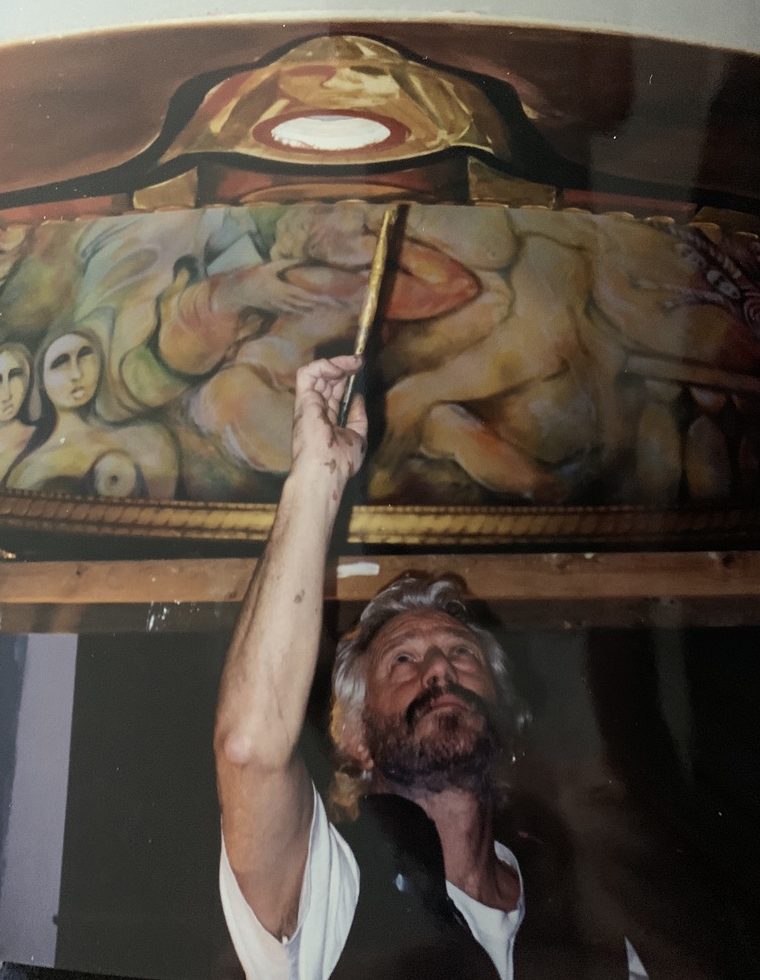