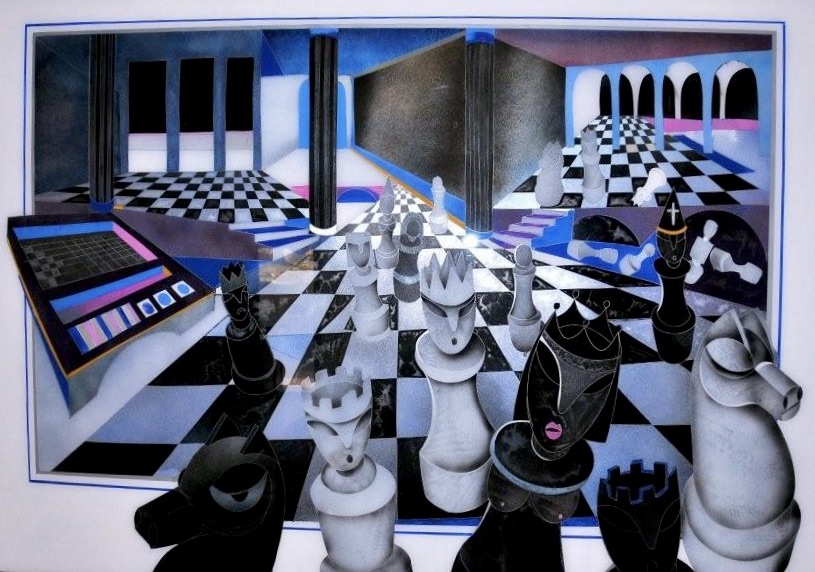 When I met Paul Ygartua at the Oneofakind Show in New York this past December I was at an advantage, having lived with him for 15 years. That is how long I’ve been collecting his work. And although I felt I knew him intimately, being part of my home for so long, meeting Paul in person provided a new dimension of appreciation for the man and his art.

The first revelation in meeting Paul is that genius can be warm and gracious with a twinkle in his eye and an easy smile; and is accompanied by a beautiful, dynamic, dedicated partner, Joanne, his wife. The second is passion; when Paul who at times is dwarfed by 100 foot murals bends down to direct your attention to an almost imperceptible brush stroke, itself dwarfed by a 6 foot work. Third, is to be reminded of the breadth and scope of his portfolio: subject, geography, style and technique coalesce to form a staggering body of work.

The Ygartuas are a global couple and Paul’s work reflects their sojourns in Europe, South America, the Middle East, Australia, Mexico and Canada. His series of Native Americans captures the inner strength and dignity of its subjects, in classic style, epitomized by the mural on the wall of the United Nations Pavilion at the1986 Expo in Vancouver, BC. Paul’s abstract landscapes are vibrant and bold and while they cover a diverse terrain they are always steeped in a local sense of place. Abstract expressionism is what drew me to his work initially and describes the still lifes, jazz legends and recent series, Primordial Chaos.

As I look around the Oneofakind exhibit a portrait of John Lennon from the artist’s “Legends” series is riveting and takes me back to my first encounter with Paul‘s work, at a small gallery in Quebec City where I glimpsed the color, motion and attitude of Roi et Reine du Carnaval. The painting haunted and drew me and my wife back the next day. It became our first acquisition.

If you are so fortunate as to own an Ygartua, be prepared for a life interrupted. Hours mesmerized by the sheer joy and beauty of the work; hours spent in contemplation as you savor the artistic details and hours of introspection as you plumb the depths and layers of meaning. No day is safe. Any given moment of any given day will find you paused before a painting, hostage to a color, a brush stroke, a line, a tantalizing thought. Stand close to observe nuance and detail, stand back for majesty and awe.

The following year we returned to the gallery and acquired 3 more works. Another version of Roi et Reine du Carnaval, an abstract oil of a man and woman on a beach Fantaisie Estivale and a small pretty still life Ete Fleur I, with a checkerboard pattern that didn’t quite fit in with the others but foreshadowed what was to come.

Life moved on and years later we came upon a version of Martini Lounge, an addition that renewed our zeal for additional Ygartuas. I went online and found Paul’s website and became intrigued by the idea of commissioning a work. A confluence of events made the idea a reality. I commissioned a painting in Paul’s reverse acrylic on plexiglass technique to provide a visual depiction of my play, 1.White Wins!? (the title is based on a chess move notation).

I approached Paul and Joanne with my project knowing he had featured chess themes in prior works. We exchanged emails about size, colors and the general subject. I sent the play script and a summary to Paul and Joanne. And although they welcomed further input I decided to place my trust in Paul’s genius and let the artist create! I met Paul and Joanne at Oneofakind NY to see the painting for the first time.

I am writing this today because of Paul’s depiction of 1.White Wins!? surpassed my wildest expectations!

The painting is a striking, color imbued rendition of the play’s 3 acts featuring halls of academia, a corporate environment and their metaphysical convergence impacting the lives of the characters, as well as a simulated computer, representing technology and its omnipotence over our collective lives. Anthropomorphic chess pieces represent the play’s characters with subtle tonal variations and “facial” expressions, some lurching forward (to even beyond the painting’s border), others wildly askew, symbolizing the themes of the play: personal and corporate morality examined through the prisms of determinism, free will, physics, religion and race via the lives of a philosophy professor and four students at their first meeting and twenty-five years later.

A new dimension of appreciation comes when the artist explains the lines, brush strokes, color and details of your own Ygartua. Paul and Joanne took the time to thoroughly read my play and were intimately familiar with the characters, themes and plot. Discussing Paul’s interpretation of 1.White Wins!? and the process by which he deconstructed its concepts and flow and reassembled them into an integrated whole using his magnificent vision was an unforgettable experience. Paul as an artist and philosopher understood my play and captured its essence beyond anything I could have imagined.

“The next painting will be the best“ Paul has said describing his “ongoing struggle for perfection – being able to break through mental and physical barriers, pushing the envelope toward realizing and developing that vision until ultimately a style is born. Then taking that style and working it until it cannot be developed further and only then moving on to adapt this to new ideas, taking you on a journey of versatility and determination to the next painting.”

While I know Paul continues his incredible artistic journey, I can’t help but savor the notion that for a brief moment in time 1.WhiteWins!? was Paul’s “best painting.” For me, it will always hold that distinction. 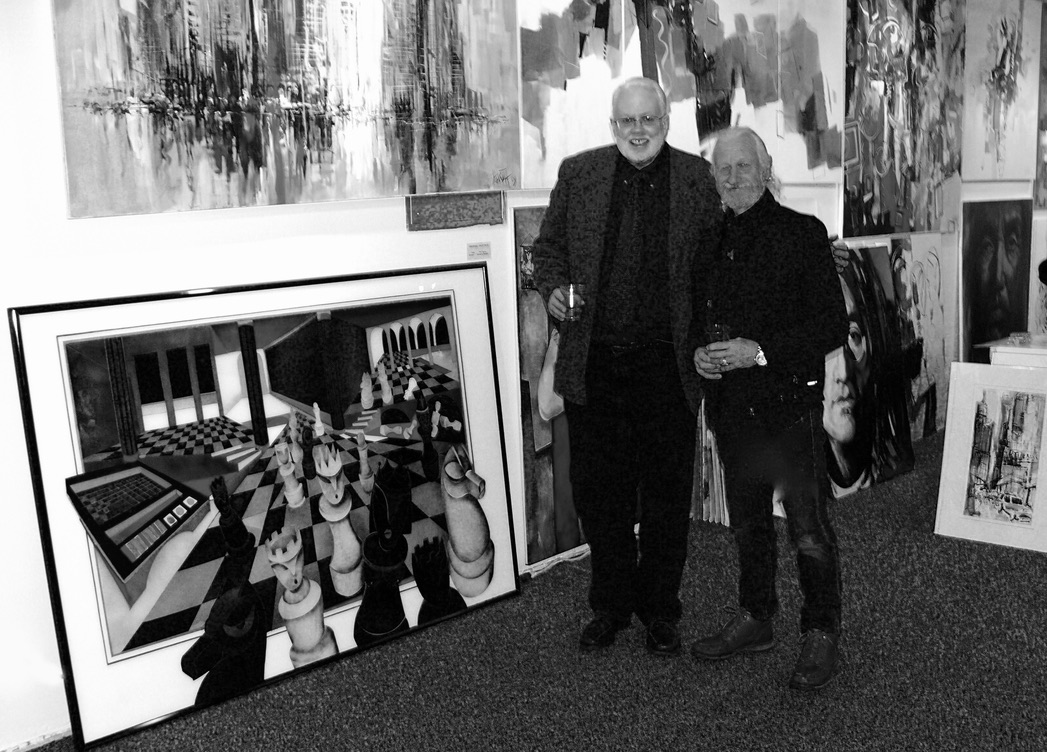 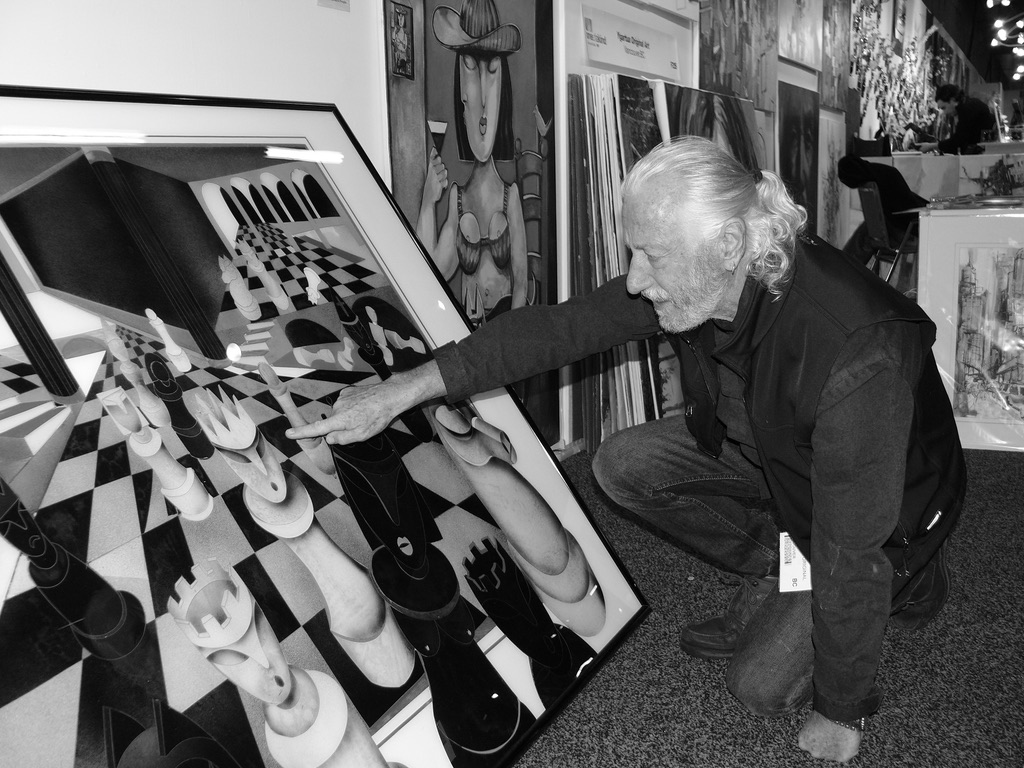 RE: REQUEST FOR CUSTOM/COMMISSIONED WORK 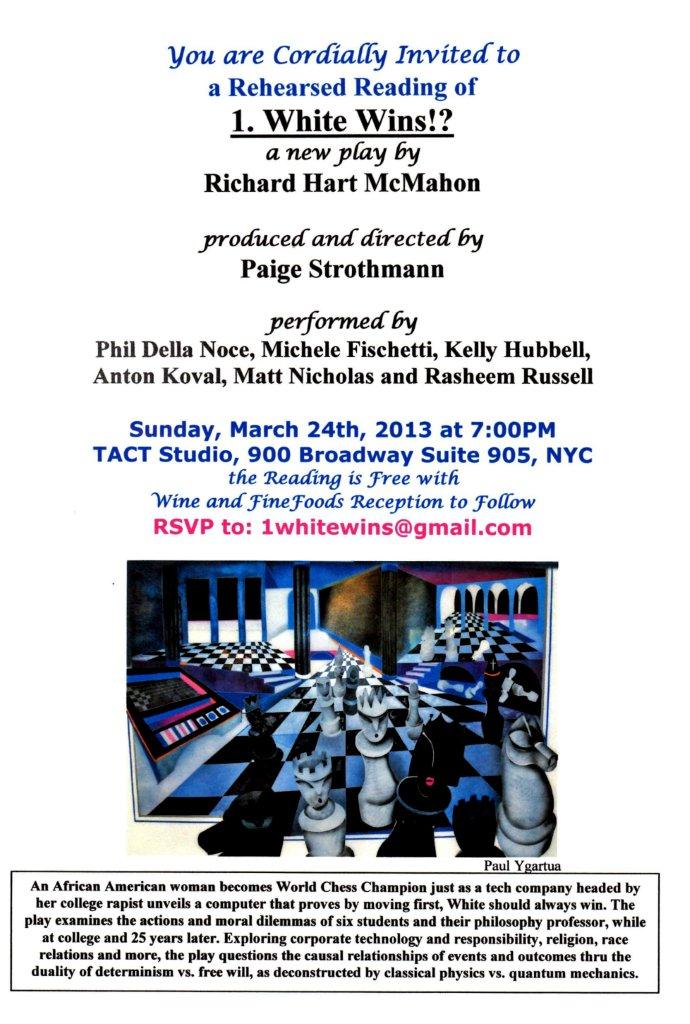